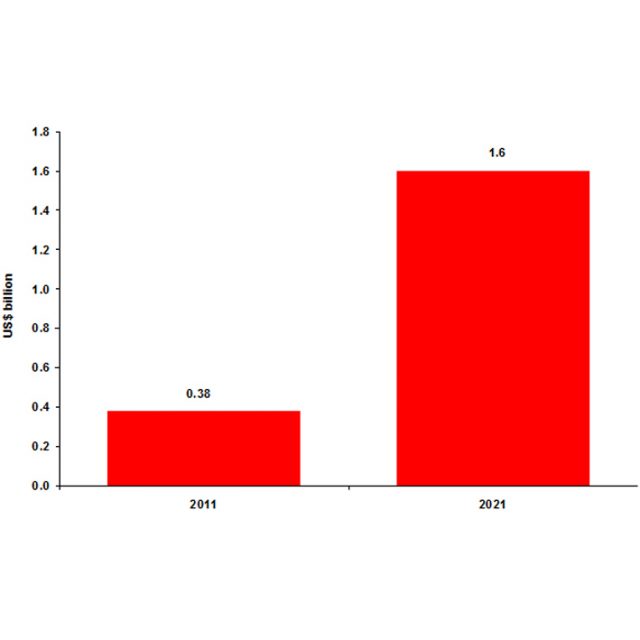 The market for wireless sensor networks (WSNs) will grow rapidly from US$0.45bn in 2011 to $2bn in 2021, according to a report from IDTechEx.

The figures refer to WSN defined as wireless mesh networks, that is self-healing and self-organising. They will eventually enable the automatic monitoring of forest fires, avalanches, hurricanes, failure of country wide utility equipment, traffic, hospitals and more over wide areas, something previously impossible. It has started already with more humble killer applications such as automating meter readings in buildings, and manufacture and process control automation.

The market for non-mesh wireless sensor systems in general is far larger and some proposed standards apply to both. For example, in addition to the above, the market for real-time locating systems is $0.38bn in 2011 rising to $1.6bn in 2021.

The figures come from the IDTechEx report “Wireless Sensor Networks 2011-2021”.

By far the biggest success of WSN has been in smart meters, says the report. This is because in many countries around the world governments have mandated that smart meters need to be installed in certain circumstances, such as new house builds or retrofits. More than 50 million have been installed so far.

Now meter reading data is sent wirelessly, and the power is taken from the electricity supply so no batteries are needed. This is seen as a starting point to home automation – wireless sensors embedded in the house that will automatically communicate with the smart meter, thermostat and so on. It is part of the smart grid activity. Here, the Zigbee protocol is being employed.

However, the report warns those that supply WSN that there is no single standard that has emerged as a clear winner.

“Indeed, many so called standards are not – many companies implementing Zigbee for example meet the basic criteria to use the Zigbee label but add further capability resulting in systems that are not interoperable with different sensors from different vendors,” said an IDTechEx statement.

“Many vendors, including giant system integrators that have their own proprietary wireless communications, hope that they may become the chosen default ‘standard’. A small number may win. The industry is not gearing towards a more collaborative approach to allow many to win. This in turn is putting off adoption. Would you install tens of thousands of wireless sensors in your plant locations if it was a proprietary solution? What if that company would not exist in five years?”

Another problem that vendors need to address is that many only offer hardware. Adopters are often on their own for the software, which they need to make useful decisions on the data collected to give the system a payback.

IDTechEx notes that in wireless sensing, the big successes are those that offer complete packages. One example is Savi Technology, part of Lockheed Martin, that offer a full system to asset tracking and visibility and the other is Ubisense, a UK company that has recently listed (and oversubscribed in doing so) based on a real-time locating system.

In addition, reducing the price and increasing the life of the nodes is key to the high volume applications.

In the report, IDTechEx forecasts the market in detail. It studies how the average price per node will drop from $29 in 2011 per piece to $25 per piece in 2021. The report looks at the latest activity and sees how these difficulties are being tackled.