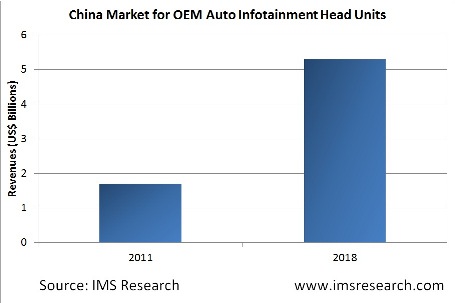 Shanghai, China. February 14, 2012 — Recent analysis from IMS Research forecasts that total revenues for the Chinese market for infotainment systems[1] will increase quickly from US$1.7 billion in 2011 to $5.3 billion in 2018. IMS Research is an independent supplier of market research and consultancy to the global electronics industry, with offices in Europe, the USA, China, Taiwan, South Korea, and Japan.

The large increase in revenues is said to be related to two factors. First, unit shipments for all major head unit types are predicted to almost double by 2018, thanks to the projected increase in light vehicle sales in China. Second, IMS Research projects that the average revenue for in-car infotainment systems per vehicle will increase beyond US$200 by 2018.

Michael Liu, an automotive analyst in IMS Research’s Shanghai office commented, “Although total market revenues are forecast to increase quickly up to 2018, there is a very different scenario for the future of each head unit type. For example, the OEM (original equipment manufacturer) audio head unit market will stay flat over the forecast period, despite a shrinking OEM fitment rate caused by a shift to navigation head units in many mid-level cars.”

The future for the OEM audio/video head unit market, however, is desperate. It is forecast to shrink and eventually disappear. Safety issues and limited demand for watching video content while in the car are the two major reasons for this.

By contrast, the future of the OEM market for navigation head units is reported by IMS to be very promising. Market revenue is projected to increase fivefold by 2018. This is largely because OEM navigation head units are predicted to be used in increasing volumes of mid- and entry-level light vehicles. Furthermore, a falling average selling price will boost sales, and having navigation functionality is becoming a necessity for many in China as the road infrastructure is developing very quickly.

Outside of the established head unit types, the market for embedded telematics head units shows promise. Although the market is in an early phase in China right now, such systems will see some penetration in high-end and luxury light vehicles in the near future. An important factor for this market is how much the service price will decrease in the near future. This will be particularly critical if the product is to penetrate mid- or even entry-level vehicles.

This is the second edition of the IMS Research report on the Chinese Market for In-Car Audio, Infotainment & Driver Information/Telematics Systems. This 2011 edition continues to offer IMS Research’s most comprehensive coverage of the light vehicle entertainment, navigation and telematics markets, including forecasts of important trends to 2018. The report is aimed at marketing personnel at system suppliers, vehicle manufacturers, semiconductor suppliers, and software companies in the supply chain.