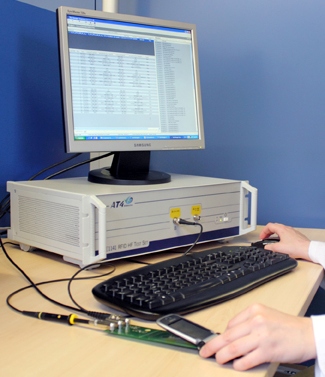 After months of intensive co-operation between Sony and AT4 wireless to successfully debug and verify the fulfilment of the NFC Forum Digital Protocol and Tag Operation test requirements, the new Sony RC-S380 NFC device has reportedly become the first device in the world to obtain NFC Forum certification.

Since AT4 wireless RIDER Tester became one of the first test solutions officially approved by the NFC Forum in 2010, and because AT4 wireless Laboratory was one of the first authorised laboratories for the NFC Forum Certification Programme in its locations of Taiwan, USA and Spain, several NFC OEMs (original equipment manufacturers) have chosen AT4 wireless as their preferred testing partner, for its technical expertise in NFC Forum certification testing, laboratory capabilities, and its role as an NFC test tool.

“We are proud and excited to be part of the first NFC Forum certification achieved by Sony, a leading player in NFC technology,” commented Luis Fernando Martinez, AT4 wireless’s general director. “AT4 wireless has been actively participating in the development of the NFC Forum Certification Programme and this achievement definitively represents a very important milestone for the success of NFC technology”.

“AT4 wireless owns the RIDER T3111 test system, which is a leading test platform for NFC Forum certification. We have been able to achieve NFC Forum authorisation for our test labs in Europe, North America and APAC in order to better serve chipset, device vendors and network carriers in these regions,” said Mr Martinez.

“We are pleased that our RC-S380 reader has become the first NFC Forum-certified product, thanks to AT4 wireless’s full support and its RIDER Tester,” said Kazuyuki Sakamoto, general manager of Sony FeliCa Business Division. “The RIDER Tester will be of great assistance to any company that plans to get approval for NFC Forum certification. Sony and its key partners continue to contribute towards the expansion of NFC technology.”

AT4 wireless is a leading manufacturer of conformance and R&D test equipment for wireless and cellular technologies such as Bluetooth®, RFID, NFC, WiMAX™, 2G (GSM, GPRS and EDGE), 3G (UMTS, HSPA+) and LTE™ . Its laboratories cover services for conformance, regulatory, performance, carrier device acceptance, field, functional and interoperability testing as well as worldwide compliance and type approval consulting in over 200 countries.

AT4 wireless was founded in 1991, has more than 350 employees worldwide and is headquartered in Malaga, Spain, with locations in the USA, Taiwan and Chile to support customers globally.