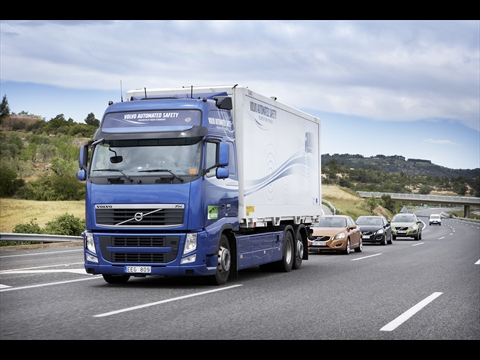 Barcelona, Spain — Volvo and five international partners have achieved a world first by testing a ‘road train’ comprising a Volvo XC60, a V60 and an S60 plus one truck automatically driving in convoy over a 200km (125 mile) route. The road train was successfully driven last week on a public motorway in Spain among other road users.

“We covered 200 kilometres in one day and the test turned out well. We’re really delighted,” says Linda Wahlström, project manager for the SARTRE project at Volvo Car Corporation.

A road train consists of a lead vehicle driven by a professional driver followed by a number of additional cars. Building on Volvo Car Corporation’s and Volvo Technology’s already existing safety systems — including features such as in-car cameras, radar and laser sensors — the vehicles monitor the lead vehicle and also other vehicles in their immediate vicinity. By adding in wireless communication, the vehicles in the platoon ‘mimic’ the lead vehicle using Ricardo autonomous control — accelerating, braking and turning in exactly the same way as the leader.

The project aims to deliver improved comfort for drivers, who can now spend their time doing other things while driving. They can work on their laptops, read a book or sit back and enjoy a relaxed lunch.

Naturally the project also aims to improve traffic safety, reduce environmental impact and — thanks to smooth speed control — cut the risk of traffic tailbacks. The historic road train in Spain was made up of one lead vehicle and four trailing vehicles.

“Driving among other road-users is a great milestone in our project. It was truly thrilling,” says Linda Wahlström. The vehicles drove at 85 kilometres an hour. The gap between each vehicle was just six metres. “During our trials on the test circuit we tried out gaps from five to 15 metres,” she adds.

Sitting in a car just six metres behind another one while travelling at 85 km/h (53mph) and relying totally on the technology may feel a bit scary. But the experiences gained so far indicate that people acclimatise very quickly.

The three-year SARTRE project has been under way since 2009. All told, the vehicles in the project have covered about 10,000 kilometres. Following this test on public roads in Spain, the project is now entering a new phase with the focus on analysis of fuel consumption.

“We’ve learnt a whole lot during this period. People think that autonomous driving is science fiction, but the fact is that the technology is already here. From the purely conceptual viewpoint, it works fine and road train will be around in one form or another in the future,” says Linda Wahlström.

She continues: “We’ve focused really hard on changing as little as possible in existing systems. Everything should function without any infrastructure changes to the roads or expensive additional components in the cars. Apart from the software developed as part of the project, it is really only the wireless network installed between the cars that set them apart from other cars available in showrooms today.”

The SARTRE project (Safe Road Trains for the Environment) is part-funded by the European Commission under the Framework 7 programme. SARTRE is led by Ricardo UK Ltd and involves collaboration between Idiada and Tecnalia Research & Innovation of Spain, Institut für Kraftfahrzeuge Aachen (IKA) of Germany, SP Technical Research Institute of Sweden, Volvo Car Corporation and Volvo Technology of Sweden.

SARTRE aims to encourage a step change in personal transport usage through the development of safe environmental road trains (or ‘platoons’ in the jargon). Systems are being developed in prototype form that will facilitate the safe adoption of road trains on un-modified public highways with full interaction with non-platoon vehicles. The project is addressing three key transportation issues; environment, safety and congestion, while encouraging driver acceptance through the prospect of increased driver comfort.