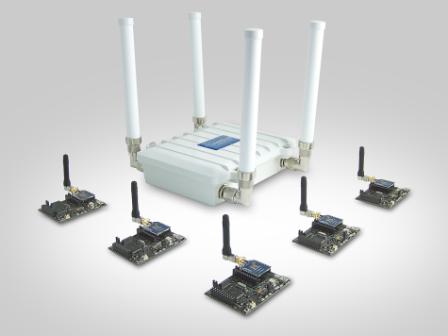 Zaragoza, Spain – A new multiprotocol router launched by Libelium allows the connection of any sensor or actuator to the Cloud via high speed 3G networks. This, says the company, opens up a wide range of possibilities for development of the Internet of Things.

Meshlium Xtreme is the new multiprotocol router for wireless sensor networks designed to connect ZigBee, Wifi and Bluetooth sensors to the Internet through 3G connectivity. The new line allows the sending of information gathered by hundreds of sensor nodes at the same time, as it counts with an unprecedented ‘upload to the Cloud’ bandwidth of 5.5 Mb/s – more than 10 times faster than traditional GPRS gateways.

The 3G interface in Meshlium Xtreme connects worldwide to WCDMA and HSPA networks as it uses different frequency bands (850/900/1800/1900/2100MHz) depending on the carrier and country regulations, allowing a massive transfer of all the data acquired by the sensors of the network.

“Meshlium may communicate with ZigBee, Wifi and Bluetooth sensor nodes and then send the information collected to the Cloud by either 3G or Ethernet interfaces depending on the communication available at any time,” says David Gascón, Libelium’s CTO. “Its modular architecture allows customers to choose only the necessary communication radios to ensure a cost-effective solution for each Internet of Things project,” he adds.

Meshlium Xtreme includes a friendly Open Source web application that can be controlled from any browser or smartphone and can be configured in just three steps, even deciding data destination, either locally or in a Cloud database. Developers have also the opportunity to run their own applications in Meshlium which runs a Linux distribution including the main runtime libraries to execute C++, Java or PHP.

A robust aluminium waterproof enclosure protects the router in projects where sensors are placed outside, such as smart parking or smart city applications.

Meshlium Xtreme is CE- and FCC-certified and is said by Libelium to be ideally suited to be the gateway for wireless sensor networks implemented with its award-winning Waspmote platform.