Home › IoT News › mHealth › Smart Igloos, Connected Trees and Me – What are they on at Ericsson Research? 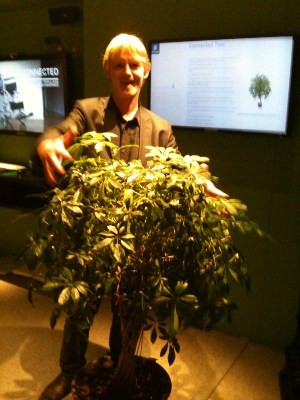 Stockholm, Sweden. June 27, 2012 — M2M Now has been given unrivalled access this week to some serious brainpower at Ericsson Research in Stockholm. Discussions covered temperature sensors in a home-made igloo, handshakes that exchange business cards and a tree that ‘sees’ you coming. As Jeremy Cowan says, you couldn’t make this stuff up!

Ericsson Research has lifted the lid on some of its extra-ordinary (I use the word carefully) research in a variety of communications sectors. Alone among the machine-to-machine communications media, M2M Now was invited by the GSMA to hear what research results are coming down the pike.

Erik Kruse, strategic marketing manager & networked society evangelist at Ericsson Networked Society Lab is an expert in consumer demands. The company, he says, sees three key technologies for the future; mobility, broadband and the cloud. “An ‘Interaction Infrastructure’ will be at the heart of healthcare, education, security & safety, commerce, government, media, utilities, and transport & logistics. Around that we need to see how we can establish, trust and integrity and share knowledge.”

Jari Arkko, internet architecture expert at Ericsson Research momentarily baffled his audience of visiting media when he began to describe a recent experiment on ‘smart igloos’. His department built an Eskimo-style snow house in a remote valley in the Swiss Alps earlier this year. This was not the mad escape from work that it might appear.

“For us,” says Arkko, “the question was, can we apply smart home principles to an igloo? It wasn’t just fun, it helped us establish practical, weather-proof solutions, test low-cost devices, as well as low-power and intermittent communications. We used generic technologies such as mobile broadband and IPv6.

“We put (wired) sensors in the igloo walls to assess temperature fluctuations, and in the snowpack on which the igloo was built to measure the temperature at varying depths and any changes that might forewarn us of avalanches. We connected it through a Delay Tolerant Network communicating with the cloud,” adds Arkko.

The conclusion? Well, Arkko says, “Generic technologies work well for ‘diverse’ (Is that a euphemism for ‘wild’? Ed.) applications like this. Mobile broadband, IP, cloud and web technologies are good foundations for the new Networked Society. And low power, low cost networking is in our focus.”

Ericsson’s “Twittering Tree” senses changes in the electromagnetic field around it as people pass, and sends Tweets that reflect its mood directly to its Twitter account, @ConnectedTree. The tree also reacts to people’s presence and movements by playing music, speaking and turning on and off lights.

Again, there is method in their madness. One application discussed by its proponent, Jan Hederen, strategy manager within Ericsson’s Networks division, is that furniture, doors and entire rooms can be connected so that carers and family can be aware of movements (or otherwise) of elderly people in sheltered accommodation. Without ever watching their movements it is possible to detect and monitor their movements around an apartment, preserving their independent living while checking on their safety and wellbeing.

The electromagnetic field in humans is similarly being turned to technological advantage by Ericsson. A device carried in a pocket can be connected through the human body with other devices to play music through electromagnetically-connected headsets, to open doors using a password stored in the device, or to exchange business cards or playlists with another connected person simply through a handshake (see: www.ericsson.com/networkedsociety)

In Croatia, Ericsson has found a state that is embracing the possibilities of providing better healthcare through GSM connections. As Jon Gamble, Ericsson’s spokesman says, “There are 500 million chronically sick people in the world. They consume 80% of all healthcare budgets. What we’re doing is more than sending photos of conditions to doctors in appointments. Croatia is very interested in using fixed and mobile network infrastructure to support hospital services.”

The company has developed a doctor’s or nurse’s bag containing a blood pressure and pulse meter, and portable devices for measuring blood sugar levels and lung capacity. Some can be used by carers, others by patients themselves (for example, a connected monitor can measure your heart rate while out you’re walking the dog). All the devices are designed to send their data by Bluetooth to a mobile handset which acts as a router sending on data to carers.

The one thing the healthcare device doesn’t do is answer the thorny question of ‘Who is the customer?’. “That’s a very good question,” says Gamble. “In our view it’s the operator, but operators need to work with technical solution providers of this kit, and with governments.”

To see a video of Ericsson’s work delivering connected healthcare and education to villages in the Amazon basin, go to: http://bit.ly/Ki8NTJ