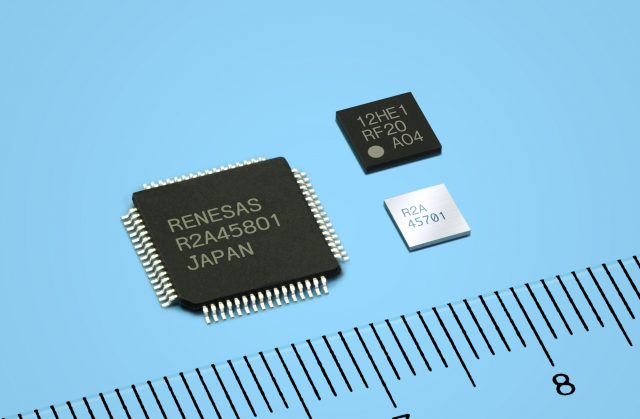 Dusseldorf, Germany – Renesas Electronics, a supplier of advanced semiconductors, has developed a new near field communication (NFC) wireless charging system designed to eliminate the power cable for charging and to increase systems efficiency. In addition to wireless charging applications, NFC can be used for a variety of other applications, including payment transactions, transportation systems, and ticketing, and newer applications such as gaming and healthcare devices.

Renesas supplies the components needed to build such a system, including: the NFC microcontroller (MCU) RF20, the power transmitter IC R2A45801, and the power receiver IC R2A45701. Renesas also provides the total kit including peripheral general purpose devices, such as power semiconductor devices, as a system solution.

Wireless charging is starting to become popular in consumer products such as smartphones. It eases battery charging of portable devices and makes cables and connectors redundant. Today’s existing wireless charging systems typically couple two antennas, one for receiving and one for transmitting power. The gap between and the combination of the two antennas strongly influence the efficiency of the charging power.

The Renesas NFC wireless charging technology widens the charging area to about 10cm. It incorporates the technology of the existing NFC MCU, and utilises the NFC antenna to implement a wireless charging system that uses a single RX antenna for NFC communication and receiving power, thereby improving reliability while reducing the bill of material of a receiver design.

To make it easier for developers to incorporate this system into their mobile devices, Renesas has developed the NFC MCU, the power receiver IC, and the power transmitter IC built around the company’s proven power technology. These new products are the main components necessary to implement a wireless charging system and are supplied as a total solution kit.

The NFC wireless charging system solution not only makes the charging cable-free, but also makes it possible to achieve a new, more flexible level of wireless connectivity by fusing NFC and wireless charging technology.
Key features of the Renesas’ Wireless Charging System include:

2) Expansion of the charging area with NFC
The exclusive technology employing NFC makes it possible to widen the charging area to about 10cm, enabling developers to build a wireless charging system relatively unaffected by positioning deviation. The flexibility in mobile handset power receiver positioning allows more flexible design for handsets and power transmitters.

3) Ability to build wireless charging systems with a high level of safety
NFC supports bi-directional intercommunication, so it is possible to verify whether a device can be charged before the supply of power begins. This increases the safety of the wireless charging.