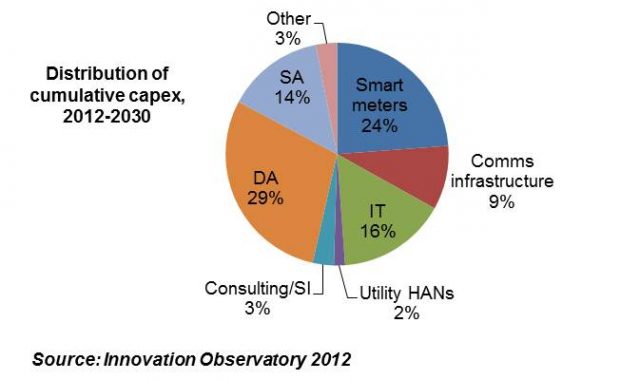 Changes in Brazil’s smart meter policy have had a material impact on Innovation Observatory’s latest technology investment forecast for that country. Other policy and economic changes are also reflected in a new report, which shows that globally the market remains buoyant until after 2018, and that cumulative investment by 2030 is predicted to reach almost USD400 billion.

China is forecast to dominate global smart grid capital expenditure (capex) for at least the next seven years, with the US and European Union countries also major investors in smart grid infrastructure including grid automation, communications infrastructure, IT systems and hardware, systems integration, and home area network equipment, as well as smart meters.

The USA, India, Japan, Russia, Germany, France, UK, Spain and Turkey follow China as the biggest investors by value in smart grid infrastructure between 2012 and 2030, according to Innovation Observatory’s report “Smart Grid Technology Investment: Forecasts for 2012-2030”.

The decision by the Brazil Electricity Regulation Agency (ANEEL) to make smart meter deployment voluntary for existing customers means the Innovation Observatory forecast for deployed meters in that country has been reduced to 27 million by 2030 – making it 11th in the ranking of smart-meter deployments by 2030.

Competition to win contracts with utilities in these leading smart grid markets will be fierce, as the sheer scale of the investment is creating a huge appetite to supply. Technology suppliers will need to tailor their strategies for different geographic regions, and adopt different approaches depending upon their size, their legacy industry expertise and the specific part of the smart grid value chain they serve.

A pdf report and Excel data annex cover detailed technology component capex and opex forecasts, globally, per region and per country for the most significant economies.