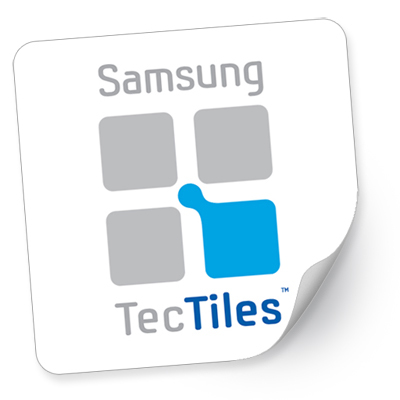 Dallas, Texas, USA. (BUSINESS WIRE) — Samsung Mobile continues to advance the use of NFC technology in everyday life with the roll-out of Samsung TecTile Version 3.0, the latest update to its popular mobile application.

Samsung TecTile was launched alongside the Samsung Galaxy S® III as an introduction to the user-friendly capabilities of NFC beyond mobile payments. With the US launch of the Samsung Galaxy Note® II, TecTile programmable NFC tags and the TecTile 3.0 mobile application can now automate everyday smartphone functions on Samsung’s newest iconic device. With the largest user base of NFC-enabled devices in the US, Samsung continues to broaden the use of NFC technology for consumers and businesses by expanding and evolving the capabilities of the TecTile mobile application. Enhancements offered with TecTile Version 3.0 include:

Programming Enhancements & Improved Usability
– Programme multiple actions to a single TecTile – With one tap, a TecTile can perform a series of actions including turning on Bluetooth®, launching the Navigation app and calling voicemail when entering a car.
– Customise Profiles – Version 3.0 enables users to turn the notion of a static TecTile on its head. Define preloaded Profiles within the app and programme a different TecTile tag to launch each Profile – such as ‘normal’, ‘office’, ‘night’ and ‘car’ – allowing for easy toggling between Profiles throughout the day. Groups can also take advantage of Profiles. Rather than programme a TecTile to evoke the same actions on every smartphone with every tap, Profiles allow one TecTile to perform customised actions for different users when scanned. For example, within the app, each TecTile user in an office can customise their ‘meeting’ Profile to fit their specific preferences, such as automatically setting the phone to vibrate or silent mode, depending on user choice. Then, programme one TecTile in a conference room to automatically launch each user’s unique, custom ‘meeting’ Profile upon tapping. Users can also create and add their own custom Profiles based on daily activities, like ‘workout,’ ‘gaming’ or ‘TV’.

– Store TecTile tag history – Users can now keep a log of all TecTile tags they programme for easy reference.

Programming Additions & Application Integration: Samsung has expanded the list of phone settings that TecTile can change when tapped, including the addition of Airplane mode, more comprehensive alarm settings and the ability to automatically change a ringtone. In addition, TecTile 3.0 can now integrate with more applications to give users a more comprehensive experience. Specifically, TecTile can now:

– Share or edit an electronic business card, forward a call or send a pre-written email to a specific address
– Toggle between the Play and Pause settings on Music Player, or play a specific track
– In addition to integration with LinkedIn®, Facebook® and foursquare®, programme a TecTile to update a Google+ status, start a Google Talk conversation, check in on Google Places or on Glympse™ location sharing.

Pricing/Availability
Priced at US$14.99 for a pack of five, TecTile programmable NFC sticker tags are available for purchase at Samsung.com and online and in-store at AT&T, Sprint and T-Mobile. The Samsung TecTile 3.0 mobile app is available for free in the Google Play™ marketplace.