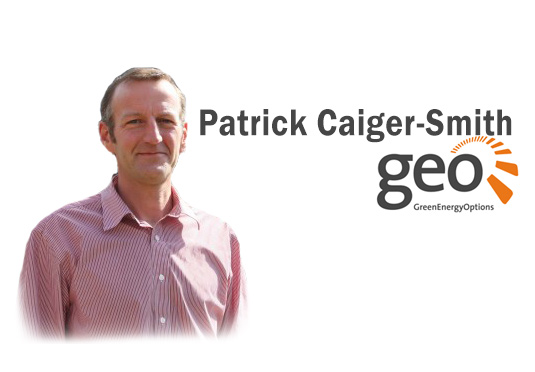 In 2006 Simon Anderson and I launched GEO, the business vision was simple – to ‘make energy visible’ to consumers. Our first developed system was very sophisticated – too sophisticated as it turned out, writes Patrick Caiger-Smith, and while people loved the idea, the reality was it gave too much information too quickly and was deemed confusing. So we scaled back the ambitions for early products, recognising that we had to introduce households to this new type of system gently or we’d lose engagement.

Five years on we have a range of more than 10 displays with different levels of sophistication, including web and mobile applications that follow the same basic principle. Having sold over 1.2million displays it is easy to argue that In-Home Displays (IHDs) are obviously needed, but in this article I would like to take the opportunity to share GEO’s experience, some market research results and important principles for this fast expanding market.

There are many comparisons to be drawn between the telco market and what is happening in the utility sector right now; this year we have seen OFGEM (Britain’s electricity and gas market regulator) try to increase competition in the energy market, and in the UK the big six energy providers are being challenged as the Co-operative enters the market. On top of this, energy price rises have led to increasing price sensitivity and customer switching.

In many ways the IHD can be considered as the ‘handset’ of the utility sector and that is why there need to be different options available to the consumer. GEO has created displays that fit into three categories:

Segmenting displays into these categories ensures that they meet customer requirements and do not over-complicate the process of monitoring energy. To go back to the telco analogy, 10 years ago consumers did not expect to use mobile phones for much other than phone calls – now we have email, internet browsing and instant messaging on our mobiles. There will always be early adopters who are looking for advancement but let’s face it, most consumers find technology fairly daunting. For that reason an entry level display, such as the push display encourages consumers, who are then likely to move on to a pull display and finally something truly smart once they are familiar with the basic technology

The aim is not to categorise customers by a specific type of display, rather, that by having a range that represents different consumer attitudes, the consumer can choose which level they are comfortable with, decide what value they want to place on such a device and ultimately have several displays that complement each other and engage the user in different ways.

This range also allows for development of supporting infrastructure (the roll-out of smart meters is discussed below). Just as different types of display support different consumers, they also meet different stakeholders’ requirements and market drivers. Energy monitoring is high on the agenda for many parties; GEO considers three perspectives to be key

Everyone is experiencing the impact of increasing energy prices and looking for ways to help budget and monitor homes and appliances. To compound this need for information, competition between utilities who want to retain price-sensitive 16 M2M Now July – September 2011 SMART ENERGY EXPERT OPINION In 2006 Simon Anderson and I launched GEO, the business vision was simple – to ‘make energy visible’ to consumers. Our first developed system was very sophisticated – too sophisticated as it turned out, writes Patrick Caiger-Smith, and while people loved the idea, the reality was it gave too much information too quickly and was deemed confusing. So we scaled back the ambitions for early products, recognising that we had to introduce households to this new type of system gently or we’d lose engagement. Do energy displays work? Insights into customer response and behaviour… The author is Patrick CaigerSmith, CEO of Green Energy Options.M2M Now July – September 2011 17 “After 12 months with an IHD 30% of trialists bought low energy appliances, 25% had considered insulation and 35% were considering installing solar panels.” consumers means that value-added packages (similar to those seen in the telco market) are becoming more common. IHDs are being used (and achieving!) customer loyalty and interest.

IHDs are proving to be key to smart meter roll-outs; a lack of customer engagement has proved to be a major risk to smart meter programmes (in the US, for example legislation has been passed that gives consumers the right to choose). Pre-smart, push displays help to allay fears but more importantly deliver the consumer-side benefits of the technology so that early on consumers can see the benefits.

Utilities can also use smart meters and displays to manage demand (the smart meter provides them with information on energy use), while the display can deliver real-time information to the consumer aiding capacity management and encouraging behavioural change.

Governments are looking for initiatives that encourage behavioural change to reduce carbon emissions and IHDs are an effective tool in these programmes. Displays can also act as the catalyst to bring people into the market for other energy efficiency products; we recognise that smart meter roll-outs are a major contributor, but IHDs can have an immediate effect and we are all aware that reductions are needed now! As mentioned previously, consumer engagement is a major factor in successful smart meter roll-outs and consequently, the smart grid.

It is clear that what links all of the above are the consumers themselves. They are the key to delivering the carbon agenda and we believe that IHDs play a major role in their continued engagement.

Since 2006 GEO has spent over UK£1 million (€1.1 million) on market research, organising focus groups, online surveys and various trials across Europe (and as far away as Australia). Most notably we ran the first Visible Energy Trial in the UK, with 275 homes using one of three displays which varied in complexity.

Trials used a basic electricity monitor (the ‘Solo’), the ‘Duet’, which monitored electricity, heating and individual appliances and the ’Trio’, a dual fuel online system which allowed consumers to view and control remotely what was happening in their home.

Reassuringly, after a year of using the displays only 12% of trialists felt that they no longer needed them, 66% of consumers were happy with displays, while the remaining trialists looked to add functionality to their display. Notably, consumers who were given one of the more basic displays were quicker to engage with the product but soon wanted to add functionality

Encouragingly, our research proved that consumers who are aware of their energy use are likely to change their behaviour. After 12 months with an IHD 90% of trialists had considered or made changes to their behaviour; 30% bought low energy appliances, 25% had considered insulation and 35% were considering installing solar panels.

In Germany initial research showed that 67% of respondents would prefer to see consumption on a simple IHD (interestingly, only 5% chose to see information on a smartphone). Another 67% thought that smart meters should come with an IHD and that they would be more likely to request a smart meter if that was the case. As with most market research, the numbers need careful interpretation, as asking people what they might want when the technology isn’t understood can lead to false conclusions. The old adage of market research before the advent of the motor vehicle comes to mind – that there was no market for a motor car, but faster horses were in great demand!

An early report from a smart metering trial in Smart City Évora (Portugal) included the following feedback: “We were surprised that the older people on the trial in particular really like using the Solo because it is easy to see and understand. They are happy using the GEO equipment because they have had a lower bill since they installed it and believe it is because of the Solo.”

In short, IHDs clearly work; they should be simple and engaging and relevant to the consumer, as with all technology, consumer appetite evolves quickly and suppliers should be prepared for this! IHDs have consistently proved to be a great engagement tool for utilities and governments who want to support consumers and their need to manage energy by making it visible.