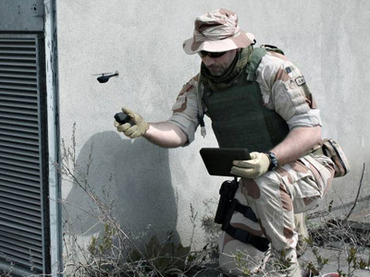 British Army forces in Afghanistan are now using 10-centimetre-long, video-linked spy helicopters to survey Taliban firing spots. The UK Ministry of Defence (MoD) plans to buy 160 of the drones in a contract worth more than €23 million.

­According to Britain’s MoD, the remote-controlled, 16 gram PD-100 PRS aircraft is produced by the Norwegian company, Prox Dynamics (www.proxdynamics.com). Dubbed the Black Hornet Nano Unmanned Air Vehicle, the drone is a traditional single-rotor helicopter, scaled down to the size of a toy. British troops receive full motion video and still images and are reported to be using the drones for reconnaissance missions, sending them ahead of ground forces to inspect enemy positions.

Each drone is equipped with a small tiltable camera, a GPS co-ordinate receiver and an onboard autopilot system complete with gyros, accelerometers and pressure sensors. This is designed to keep it stable in flight against winds as strong as 10 knots, according to reviews. The tiny aircraft is agile enough to fly inside compounds, and is quiet enough to attract minimal attention. If detected, the drones are cheap enough to be considered expendable.

The auto-pilot either follows a preprogrammed flight plan or receives commands from a manual control station, which is about the size of a large smartphone. The drone’s camera can feed compressed video or still images to an operator up to a kilometre away, and its rechargeable battery provides power for about 30 minutes of flight.

In addition to the drone and the controller, each system comes with a ground base station, which houses the operating system, main electronics, internal batteries and chargers. It also protects the drone while being transported. The weight of the entire kit is about a kilogram (2.2 lbs), easily portable in the field.

Prox Dynamics started working on the nano-drone in 2008, and released a video of the first prototype in flight a year later. The manufacturer initially planned for it to be put to civilian use, to scout sites of natural or man-made disasters for survivors and provide intelligence to rescue teams. A marketable version of the Black Hornet was first presented at the Counter Terrorist Expo in London in April, 2012.

The UK Ministry of Defence announced last November that it was awarding Prox Dynamics a contract to supply the drones to its troops in Afghanistan. The initial contract is reported to be worth about €3 million, but will likely be expanded to more than €23 million.