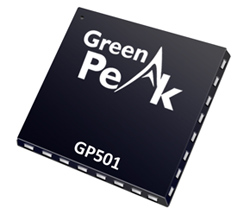 GreenPeak Technologies, a leading semiconductor company in low power RF communication, announced the GP501, a new generation of ZigBee transceivers which contains a coexistence scheme that allows Wi-Fi, Bluetooth and ZigBee chips to work side by side in the same device.

ZigBee shares the 2.4 GHz frequency band with other Wi-Fi equipment.

The GP501 has a coexistence interface to allow optimised and co-located ZigBee/Wi-Fi radios to work in the same device, successfully avoiding RF interference when operating simultaneously.

Another advantage of the GP501 is its small size: its 32-pin 5×5 mm2 footprint allows integration into even the smallest product form-factors.

While most other ZigBee transceiver chips only include a superficial inspection of the MAC and PHY headers, the GP501 looks beyond these layers and executes a Deep Packet Inspection and based on the outcome, the chip can decide if the packet has to be passed on to the higher layer application or can be ignored.

The DPI engine is also security aware, blocking unauthorised packets without involving the host processor and ensuring the system does not waste energy analysing non-compliant packets.

The DPI feature can be used for Wake-on-LAN functionality, where ultra-low power ZigBee is used to wake up the main processor from its sleep mode to enable Wi-Fi networking.