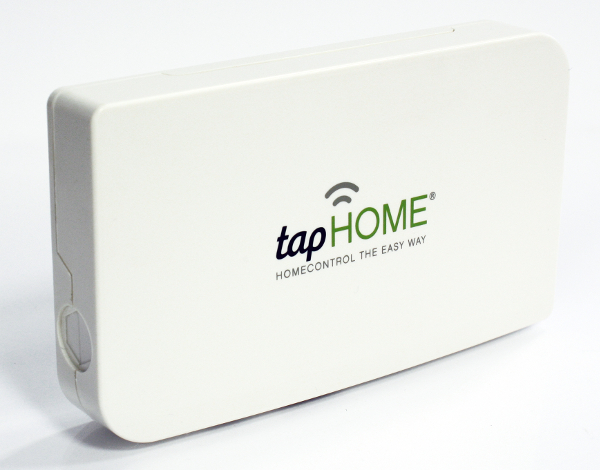 Milpitas, California, USA – New Z-wave alliance member tapHOME has developed a home control system which requires only a smartphone or tablet in order to set up and operate it.

Based on the Z-wave wireless standard, the German manufacturer’s system is managed via the tapHOME app, which is available free of charge. tapHOME has also put together a special starter pack, with which residents can easily configure the basis for their home automation network.  The starter pack contains the EASYGate base controller, an EASYPlug connector plug and an EASYPlugDim dimmer.

In line with the company’s core philosophy to make home control as straightforward as possible, the tapHOME developers have created an intuitive user interface with an unobtrusive design. The use of modern and extendable technology is ensured by basing the system on the open, reliable and scalable Z-Wave wireless standard. This allows any Z-Wave compatible device to be incorporated into the network as required.

It takes only a few minutes to install the tapHOME starter pack, and the user can connect the EASYGate to his/her router, switch or access point.  The user can then download and start the tapHOME app. The EASYGate is automatically recognised and the user simply connects the EASYPlug or EASYPlugDim to any desired socket and integrates it into the network using the learning mode.  The final steps are to give the device a name and to assign the components to categories.

Using the tapHOME tablet app, the user can digitally draw and define the outlines of individual rooms, including existing doors and windows. All the connected components are then placed in this template as icons so that the devices can be controlled easily and intuitively; just tapping on the desired icon on the smartphone screen turns the corresponding device, connected to the EASYPlug, on or off. In the case of dimmable devices, a double tap activates a special function, which allows the user to set the desired level of lighting by swiping.

To ensure maximum comfort and energy efficiency, so-called scenarios enable users to combine the various actions carried out by the tapHOME components. For example, pre-defined settings can be called up when eating dinner, using the home cinema or when leaving the house or flat. The timer function allows fixed times to be defined for automatically turning devices on and off, for controlling outside lights, for example, or for simulating one’s presence at home when on holiday. tapHOME also makes it possible to turn off all standby devices at the same time if they are not required.

The starter pack is available for €199.90. Individual EASYPlugs can be purchased for €39.90 and EASYPlugDim dimmers for €49.90. The tapHOME app is already available in the Apple iTunes Store and will also be available for Android mobile devices during the second quarter of 2013. And at the end of the second quarter of 2013, tapHOME will be enhancing the system in order to allow remote management functions via the internet, thereby also allowing iOS and Android users to control devices at home even when they are out.