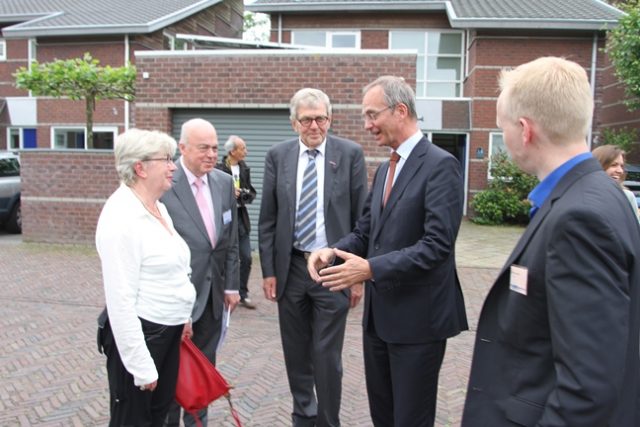 Groningen, The Netherlands – Six Dutch companies, three knowledge institutes and 40 households have initiated a pilot project in Groningen and Hoogkerk  in which consumers will test innovative, smart energy services with the goal of making sustainable energy choices and cost savings.

The objective is to investigate which smart energy services best meet the consumer’s requirements, in order to implement a sustainable and cost effective energy supply. This is the first time that consumers have been involved in such research. The trial forms part of PowerMatching City’s second phase.

PowerMatching City is the world’s first live, total-concept smart grid. These linked, intelligent (digitally) controlled energy grids are essential for achieving a proper match between energy demand and supply. Economic Affairs Minister Kamp initiated the second phase during a meeting with the participants from the City of Groningen’s Thomsonstreet.

“I am delighted that today we are taking a new important step towards the energy system and the energy consumer of the future together with households, companies and knowledge institutes,” said Albert van den Noort, PowerMatching City II’s Project Manager. “Changes are often achieved through means of open innovation in which players from different backgrounds and disciplines work together. PowerMatching City is a good example of this.”

In addition, an assessment will be conducted to determine to what extent the consumer, as part of a local community, is prepared to collectively use as much sustainable energy as possible. The extent to which sustainability is a motivating factor in their own energy consumption behaviour will be investigated.

The first phase of PowerMatching City was so successful that at the end of 2012, during the UN Conference for Sustainable Development in Brazil, Rio+20, it was pronounced one of the hundred most sustainable projects in the world. PowerMatching City I demonstrated the feasibility of creating a smart energy grid with corresponding market models using existing technologies. The results produced by PowerMatching City I are of major importance because smart energy grids are indispensable for the transition to a sustainable energy system as they facilitate the large-scale integration of sustainable energy. This breakthrough generated a great deal of attention within the international energy sector, media and government organisations.

In PowerMatching City II the research goes one step further: the focus is not only on the energy system, but on the energy consumer of the future and his needs as well. Furthermore, the costs and benefits of the smart energy grids for the various involved parties will be validated in actual practice. Using capacity management and gas, an assessment will be conducted to determine how this smart grid – in which households can exchange electricity with each other in a fully automated way – as a whole can operate stably and reliably.

The number of households in PowerMatching City II has been expanded from 18 to 40. In addition, 10 electric vehicles have been added to the pilot. A wide scale of innovative energy technologies and equipment will be used, including energy storage, peak shaving, hybrid heat pumps, micro CHPs (combined heat and power), smart charging stations for electric transport and smart household appliances. The PowerMatching City consortium consists of the project partners DNV KEMA, Enexis, Essent, Gasunie, ICT Automatisering and TNO, and furthermore includes the knowledge partners Technical University Delft, Technical University Eindhoven and the Hanze University of Applied Sciences, Groningen.