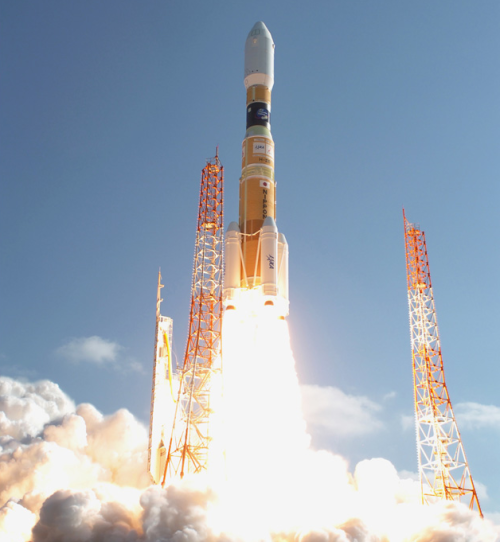 (Tanegashima, Japan. July 31, 2013) — On August 4, 2013 at 5:00 am local time, an unmanned H11-B rocket containing Libelium Sensing Technology will lift off from the Tanegashima Space Center (TNSC) in Japan en route for the International Space Station (ISS). Libelium Radiation Sensor Boards are included in the main payload of the two ArduSat satellites to be placed into orbit.

The Radiation Sensor Boards will monitor the radioactivity levels generated by space phenomena such as sun storms and background activity. This sensing technology acts as a Geiger counter, measuring gamma particles produced anywhere in space.

“Our Radiation Sensors were developed originally to measure radioactivity levels on Earth. We adapted them to meet the satellite’s restrictions in terms of weight, size and power control, in a nice collaboration between Libelium and ArduSat engineering teams,” said David Gascón, co-founder and CTO of Libelium.

The Geiger Counter designed by Libelium is integrated in the 10 x 10cm ArduSat satellites (pictured below) and will be orbiting at an altitude of 300km. The satellites will be controlled from Earth using radio transmission protocols. In addition to measuring radiation levels, the ArduSat satellites will be used to perform experiments that include the creation of a 3D model of Earth’s magnetic field, measurement of temperature changes in space, and the study of the Earth’s Albedo using an spectrometer.

The image below shows the scale of one of the prototypes of Libelium’s tiny Radiation Sensor Boards, with a size of 4 x 3cm and an overall weight of 40gr.

The launch mission is led by the Japanese space agency (JAXA) and consists of a HII-B rocket carrying the unmanned H-II Transfer Vehicle and the HTV4 – a cargo transporter — to the International Space Station (ISS). The HTV4, stocked with the ArduSat satellites and up to six tons of supplies, will rendezvous and dock with the ISS in orbit, approximately one week after lift-off.

Collaboration between engineers from Libelium (Spain) and NanoSatisfi (U.S.), the company behind the development of ArduSat (Arduino + satellite), are contributing to the August 2013 launch of the first Arduino-based Open Source satellite into space. ArduSat is designed to give ordinary people – students, teachers, individuals and enterprises – the chance to carry out experiments by controlling more than 25 different sensors integrated in the unit, (spectrometer, magnetometer, radiation, camera, gyroscope, accelerometer, temperature, etc.)

This launch heralds an era of personal space exploration. On reaching orbit, the ArduSat will be the first open space platform allowing the general public to design and run their own space-based applications, games and experiments, to steer the onboard cameras and take pictures from space on demand. The goal of the ArduSat project is to make space accessible to consumers, relatively cheaply, under the tagline “Affordable access to space, for everyone.”