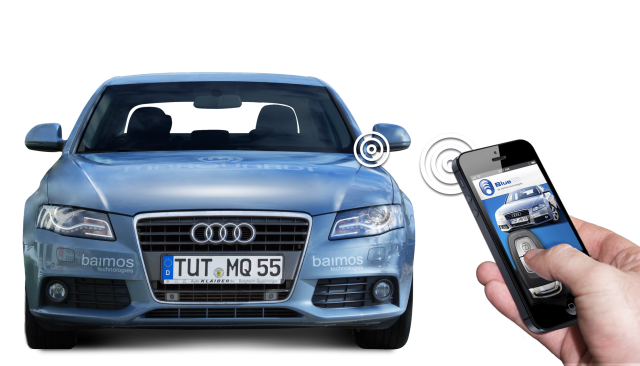 (Munich, Germany) — Carsharing vehicles can now be upgraded with M2M devices which convey vehicle data such as lock state, fuel level and parking position to the operator’s network back-end. BlueID-enabled M2M devices can open and start carshare and fleet vehicles at the touch of a button using a smartphone app.

A company specialising in digital identification technology, baimos technologies, has developed the patented BlueID technology which transforms the app into a digital key, including a digital car key. It functions through a machine-to-machine communications (M2M) module in the car or a piece of software in the central control unit of the car which receives the user’s digital access permission (called a ticket) from their carsharing smartphone app via NFC, Bluetooth Smart (Bluetooth 4.0 Low Energy) or 3G.

On receiving the encrypted permission, and following successful verification, the user can unlock and start the car by the BlueID-enabled carsharing app. The whole process takes fractions of a second and relies on high-security RSA/AES encryption with up to 4,096 bits. The connection set-up takes only 80 milliseconds (ms)  and an encrypted data packet is transmitted within 200 ms, allowing reaction times of less than 300 ms.

M2M devices and smartphone apps can be upgraded through the BlueID Software Development Kit (SDK), enabling not only M2M devices in vehicles, but also a wide range of M2M devices – for example a telematics control unit for doors or barriers – to be operated via the app. Existing M2M solutions can even be upgraded remotely using a Java/OSGi framework.

BlueID technology is designed for integration into M2M devices and smartphone apps for collaborative consumption scenarios including carsharing, corporate fleets and car rental. Access permissions for vehicles can be securely distributed and revoked at any time by the operator. The flexibility of the digital tickets provides users with an unmatched level of self-service in sharing scenarios, as well as simplifying the operator’s business model and removing the need for time-consuming physical key handover. www.BlueID.net

(Photo above:) BlueID allows carsharing cars to be opened and started via Google Android or Apple iOS smartphone apps