Home › IoT News › Smart Cities › Will smarter cities in China emerge from the haze and where will the funding come from? 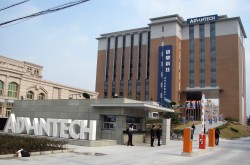 (Event Review) — Steve Rogerson reports for M2M Now from the Advantech World Partner Conference in Suzhou, China, where there’s some doubt about how M2M growth will be achieved.

Advantech is pinning its hopes on the growth of smart cities to meet its plan for a doubling of annual turnover from US$1 billion to $2 billion in the next five years, and has created a dedicated machine-to-machine communications (M2M) division to help it achieve this target. But the company’s leaders were more than a little vague when asked about who would make the necessary investment to bring about what they hoped would be a smart city revolution.

These were conflicting messages from the company’s recent World Partner Conference in Suzhou, China, which was themed throughout on exploiting smart cities and the Internet of Things.

Advantech’s CEO, KC Liu set the tone in his opening address to the conference. “We have a mission for smart city and IoT solutions,” he said. “Most of the cities in the world will become smart cities. There are great opportunities in front of us.”

He described what could be seen today as the “tip of the iceberg” with water, electrical and telephone metering, saying there was going to be a paradigm shift to vertical systems. The smart city market, he said, would become a hypermarket between 2020 and 2025, and by 2030 he forecast it would reach $10 trillion.

“Embedded computers and intelligent systems will be the core building blocks for this,” said Liu. “We need to evolve our general embedded platforms to application-ready platforms and on to service-ready platforms. This will be a new level of value-added offering.”

The need for the technology can be seen from predictions such as 70% of the world’s population will be living in cities by 2050, bringing with them problems of traffic congestion, pollution and security. Already we are seeing cities start to implement technology to help them deal with the influx. Taiwan, for example, where Advantech has its home, has already pledged to move to 100% electronic road toll collection. There are trials in the USA and Europe on automatic guided vehicles. Hospitals are looking at remote monitoring so they can treat more patients at home.

“The Internet of Things will enrich the lives of everyone on the planet,” Rick Dwyer, Intel vice-president, told delegates. “It is about collecting data and converting that data into actionable information to deliver valued services. It needs to be actionable and monetised information. It is about business transformation.”

But the question of who would pay for this transformation brought only vague answers. Chaney Ho, Advantech’s president, said it depended on governments to put their hands in their pockets, and gave the example of China where the government had already approved 300 cities to go through the process.

He also pointed to Japan where the promise of the 2020 Olympic Games had prompted its government to initiate a smart city transformation. “The governments need to approve the services,” said Ho.

Dwyer added: “Decisions will be made at a country by country and city by city level. They will see the tremendous value in providing services to their citizens.”

But he admitted that a lot of the predictions were guesswork when it came to what services would be provided. “We don’t know what we don’t know,” he said. “There are new business models coming in each day because of connected devices. There are developers on Android who are too young to drive who are creating new applications.”

The company’s new M2M division will combine resources in China and Taiwan and will be headed by vice-president Miller Chang. Existing wireless and module divisions have been incorporated into the group, which will have 20 dedicated people initially. “We plan to hire another 20 engineers in China,” said Chang.

Ho finished by saying that to exploit this growing market, the company’s salespeople and engineers needed to start talking a new language.

“We are facing many different vertical markets,” he said. “We are talking with doctors and casino owners. They are not engineers. So we should not be selling products, we should be selling applications and solutions. We should talk to the customer using their language.”