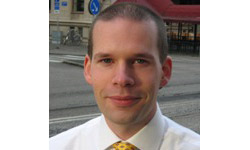 Gothenburg, Sweden – According to a new research report from the analyst firm Berg Insight, shipments of wireless M2M modules for security applications in EU27+2 is forecasted to grow from 4.8 million in 2013 at a compound annual growth rate (CAGR) of 31.3% to reach 18.7 million in 2018. At the same time, the number of tracking devices and wireless alarm systems monitored from an alarm receiving centre and similar will grow from 14.6 million in 2013 to 29.0 million by the end of 2018.

The largest application area for wireless M2M communication in the security industry is vehicle tracking and recovery systems using devices that combine GPS and GSM/GPRS technologies. The main market segments in terms of units and value are tracking of passenger cars and commercial vehicles. For instance, in many countries, owners of luxury cars have to install tracking systems when applying for an insurance policy. In general, insurance companies also give discounts on insurance premiums and deductibles for customers that have fitted approved tracking systems on cars.

Moreover, adoption of stolen vehicle tracking services is likely to increase substantially in the next few years following implementation of the European eCall emergency call system on all new cars sold in Europe from late 2015. The same hardware platform used for enabling automatic emergency calls following accidents can also be used for additional services such as stolen vehicle tracking.

Another key application area for wireless M2M in the security industry is monitored small alarm systems. Berg Insight forecasts that 5.7 million alarm systems out of a total installed base of 9.5 million systems will be connected to cellular networks in Europe by 2018.

“There is considerable growth potential”, says André Malm (pictured), Senior Analyst at Berg Insight. “Even in markets with high penetration, such as Sweden and Norway, there are no signs of slowdown due to market saturation.”

The penetration was only about 3.3% of all businesses and households in Europe at the end of 2013. In the residential segment, the small alarm system market is partly driven by economic development and the level of homeownership, as well as new home construction activities. Another important driver is also active marketing and sales led by specialist alarm service companies. New entrants to the market in the form of various providers of home automation systems are also creating consumer awareness of security systems. “However, many of the alarm system solutions marketed by home automation providers mainly rely on self-monitoring and do not include professional monitoring services”, concluded Mr Malm.