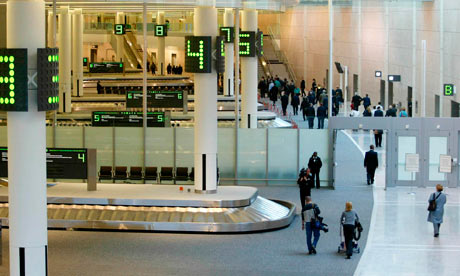 March 12, 2014 (Blog) — OK, in my most recent guest post here on M2M Now, I may have creeped you out on how a trendy neighbourhood in Toronto was keeping a pretty close eye on all of its visitors. Although I grew up in Toronto, I haven’t been to that area in a long time, so it didn’t really affect me that much. However, since millions of people fly through each major airport in Canada each year, it appears we may have been watched long after take-off…

Last month, I read an article in the Financial Post that talked about how Canada’s Communications Security Establishment (CSE – think Edward Snowden, Canadian-style) was keeping track of users who used free WiFi systems at major Canadian airports, long after they left the airport.

It appears that, in co-operation with some of the communication service providers, the CSE was also able to track users when they logged on to other WiFi accessible locations at cafes, hotels and other places, even after they left Canada.

In their defence, I do see what they were trying to do.  The idea is to differentiate between ‘regular users’ (defined as people who consistently use the same device on a regular basis) and ‘anomalous users’ (people who may be using a throwaway device for single usage).  Also, they were not actually tracking the usage (such as web page visits), but rather the users.

Still, does anyone else feel a little creeped out?  I have previously blogged that I am OK to turn over ‘some’ information if it’s in conjunction with a free offer.  So, I am OK to get a mailer once a month from my local shopping mall if it means that my son can watch the latest video on YouTube while on their WiFi network. Let’s face it, when it means that your kid isn’t screaming in your ear, it is worth the extra spam.  However, I certainly don’t agree with this.

I don’t think people expect to have total privacy any more in this digital world.  We all know that if we walk in downtown Manhattan or London for 15 minutes, the odds are high that we are going to be picked up by at least a dozen (or more) cameras, some of which have facial recognition. For the vast majority of us, this is not an issue, and no one doubts that this technology can be very valuable in catching criminals.

Finally, you may wonder what this has to do with M2M?  The answer is everything. M2M solutions have the ability to gather some of the most personal information about a person – from their biometrics, to their health, to their eating habits to where they drive.  As a society, we need to set boundaries as to what is off-limits, and this most definitely applies to M2M.

The author is Larry Bellehumeur, EVP of Sales and Marketing at Novotech Technologies (www.novotech.com). Follow Novotech on Twitter (@NovotechM2M) or follow him personally
(@LBNovotechM2M).  They’re also active on LinkedIn so you can follow their company page.