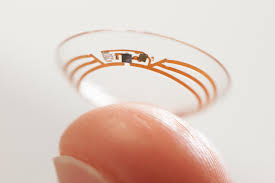 Blog. April 24, 2014 — Google has a patent pending for a contact lens with a micro camera and sensors embedded on the surface, controlled by blinking. The patent application reveals that the smart lenses will be able to take photos, process data related to them and carry out tasks based on that processed data. This comes just six months after Sony filed a patent application for “SmartWig”, said Stephen Demianyk, UK channel manager at Ipswitch.

The intended use of the patent-applied-for smart contact lens is in analysing tears to measure blood glucose levels for diabetes care, although inevitably the technology could find other less benign applications. Google said on their blospot: “You’ve probably heard that diabetes is a huge and growing problem — affecting one in every 19 people on the planet. But you may not be familiar with the daily struggle that many people with diabetes face as they try to keep their blood sugar levels under control. Uncontrolled blood sugar puts people at risk for a range of dangerous complications, some short-term and others longer term, including damage to the eyes, kidneys and heart. A friend of ours told us she worries about her mom, who once passed out from low blood sugar and drove her car off the road.”

As Ipswitch’s Demianyk said: “While we know that such a product will not see the light of markets for a long time, leading technology firms are already competing to lead the way in wearable technology. According to Forrester Research, the promise of these devices will start to be seen in businesses in 2014, and enterprises need to start putting together a road map for thinking about how wearables can improve their businesses.

“Businesses are exposing themselves to increasing risk if they don’t start now to assess the impact of wearable technology on their IT networks. If smart contact lenses, wigs, watches, glasses and gloves become as commonplace as a smartphone is today, the impact on corporate IT will be huge. All these gadgets need to pair with an ‘original’ device, which will significantly multiply the number of devices attempting to access networks. For those who found BYOD (bring your own device) a challenge, expect the wearable technology revolution to be like BYOD x 100,” added Demianyk.

Demianyk went on, “And, of course, there is security to be considered, too. High-tech contact lenses, along with Google Glass will enable the wearer to record everything that he or she sees. Similarly, smart watches have cameras and recording facilities. Discreetly transferring sensitive, competitive, information to a device outside the network could soon become as easy as a flick of the wrist or the scratch of an ear.”

A UK Freedom of Information Act (FOIA) request by Ipswitch earlier this month reportedly revealed that, when asked specifically about managing wearable technology entering the workplace, an overwhelming 85% of British public sector organisations admitted to having no plan in place.

“Unless tackled soon, this lack of planning — along with business’ naivety around a potentially colossal increase in data flow — will have a serious impact on the running of IT networks everywhere,” Demianyk warned.

The author of this blog is Stephen Demianyk,
UK channel manager at Ipswitch