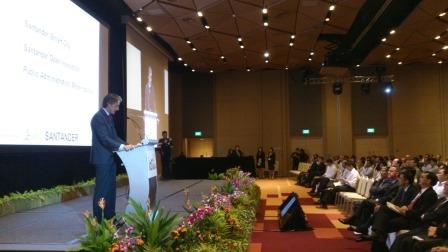 EVENT REPORT — The stakes are high, Singapore is playing for nothing less than regional leadership in the Internet of Things (IoT). The economic strategy became clear at last week’s inaugural IoT Asia event, as Jeremy Cowan reports from Singapore.

There were several clues beforehand to how seriously Singapore viewed last week’s IoT Asia event. The first came at the venue — with seating arranged for more than 800 this was not going to be your run-of-the-mill M2M or IoT conference.

Nor is it every day that the host country’s minister of state for Trade & Industry opens such events, but Teo Ser Luck arrived to do just that (also see: Singapore’s minister of state for Trade & Industry opens the inaugural IoT Asia conference)  His entrance, amid a fanfare and a large entourage, followed a double act welcome address from Oliver Tian, president of Singapore Industrial Automation Association and Aloysius Arlando, CEO of Singex Group, the organisers.

In the first keynote, Steve Leonard, executive deputy chairman of Infocomm Development Authority, Singapore, described the Internet of Things (IoT) as a way of improving lives every day, but repeated the regular call for standards harmonisation. “We’re setting up a body to ensure that Singapore’s voice is heard in IoT standards discussions.”

“Why Singapore?” he asked rhetorically. “Because we’re the perfect microcosm; we’re big enough to be a relevant test bed, and small enough to be able to make adjustments fairly easily.”

He pointed to two applications in healthcare where IoT may be able to make a difference; in monitoring blood glucose levels through tears in the eye, and in the treatment of epilepsy, a condition affecting more than 50 million people worldwide. In the case of epilepsy, for which there is no known cure, he described how a Seattle, Washington-based company, Artefact, has developed an iPhone app that – when used with a wearable sensor worn in a wristwatch sized Dialog device –  monitors patients’ vital signs before, during and after an epileptic seizure.

Data on a patients’ heart rate, temperature and hydration, can be stored on the iPhone or shared with carers, doctors and even members of the public who have also installed the app and are then instructed on how to assist. Leonard says the hope is that a large number of apps installed in the patient population would give richer data sets to carers and researchers looking for a cure for epilepsy. “This would be part of an Internet of Caring Things,” he added.

The second keynote address was given by His Excellency Inigo De La Serna Hernaiz (pictured), the mayor of Santander in Spain (also see Santander takes the first steps to being a truly integrated Smart City). Santander is one of four European cities (the others being Belgrade, Serbia; Guildford, UK; and Lubeck, Germany) deploying experimental test facilities, funded by the European Union. Of 20,000 sensors deployed in total, SmartSantander is deploying 12,000 to inform IoT researchers and to benefit the population of 200,000 people.

In Santander, the applications include environmental monitoring through fixed and vehicle-mounted sensors, parking and traffic density management, automatic irrigation of public parks, plus remote management of bicycle hire and waste collection.

The IoT applications even extend to augmented reality (AR) information for tourists. Around 2,000 RFID tag/QR code labels have been deployed, enabling users to ‘tag’ places of interest in the city, such as shops, restaurants, parks and squares.

Jim Morrish, director of Machina Research, had the unenviable task at IoT Asia of summarising the whole Internet of Things in 15 minutes. That gave little time to dwell on applications, although Morrish quoted a few, notably Sealed Air’s protective packaging machinery that used to be marketed solely as a capital equipment investment. Sealed Air has changed from an equipment sales model to a services model, to take a share of the service revenue and build a close and continuous relationship with its customers. This is also an attractive model for these end users as it reduces capital expenditure lying on the balance books, in favour of an on-going service with operational expenditure that matches usage.

Morrish also referenced Machina’s recent appointment of Alex Chau as principal analyst and head of Asia. His report on China’s smart city initiatives has concluded that, “Since the inclusion of ‘Smart City’ as a focus area in the Twelfth Five Year Plan (FYP) for National Economy, the number of cities in China to embrace smart city has rocketed.” By last September, said Machina, 311 cities have proposed or started smart city projects, affecting 1.4 billion people. The analysts expect total Chinese smart city investments for 2011-2015 to be worth more than US$260 billion.

According to Paul Marriott, senior vice-president Database & Analytics at SAP Singapore, it was as far back as 2008 that the number of “things” connected to the internet exceeded the number of people on earth. This, he said, is the fourth industrial revolution and is now a US$14 trillion business opportunity.

The first was mechanical production, the second (illustrated by Ford Model T production) was work-sharing mass production, the third industrial revolution came with the use electronics and information technology to automate production, and today the fourth revolution is based on “cyber-physical systems”.

In Google’s case, their own cyber-physical systems enable the company to transact 6.3 trillion operations per month, according to Karthikeyan Rajasekharan, technical architect, Cloud Platform, at Google Singapore. His paper was entitled Enabling Enterprise Decisions through Data Visualisation, but he didn’t shy away from describing the difficulties this presents.

The challenge for the connectivity layer, he said, lies in global deployments; how do you manage all the data at the same time? In the services layer the challenge is in data storage. And the application challenges are in velocity and volume. “Everything hinges on the requirement for near real-time analysis.”

To this end, added Rajasekharan, “Google has built the largest cloud computing platform in the world over the last 15 years. We’re easily the world’s biggest server manufacturer, yet we don’t sell any at all. They’re all for us.”

The service theme raised by Machina’s Morrish was echoed by Trent Mayberry, managing director, Digital Solutions, Asia Pacific at Accenture. He shared the idea of car tyres being sold as a service not a commodity, with drivers becoming subscribers. “This gives manufacturers repeat revenue and a longer term relationship with their customers.” he said. “Give as much data to end users as you can because you have no idea what they may do with it.”

The same advice to enable customers was seen in Rogier Van Der Heide’s keynote presentation. “Data has long been all around you,” said the vice-president and chief design officer of Philips Lighting in the Netherlands, “but it can now be seen and accessed. The question is not how to connect but how to build wisdom on that data. It requires a new way of working.”

Van Der Heide went on to give some startling statistics supporting the need for better data use:

Numerous commentators at IoT Asia suggested that this business is at a tipping point between industry-led M2M and consumer-focused IoT.  Digi International’s Frederic Luu, vice-president Sales & Marketing EMEA & Asia, agreed pointing out that the costs of connectivity, silicon, sensors, big data storage, and application integration are all falling. “That’s why this is an inflexion point,” he said.

Lower costs are important, of course. But as Mayberry said later in an industry forum: “Where’s the money in IoT? You have to see the business case before e-businesses will adopt IoT.”

Frederic Luu added. “Technology is not the problem in M2M. It’s is there a business impact? The solution has to be simple.

In a question from the audience, Steve Horley, managing director of the UK’s alertme asked, “Where is the most IoT activity in Asia?”

Accenture’s Mayberry was the first to reply: “In health, it’s vital that there’s the widest access to expensive medical devices. In smart cities, hyper growth in population means growth in Asian urban planning. This is a real opportunity for Asia to lead the world.

Frederic Luu responded that in Europe the data security issues are greater, and customers are more involved in healthcare IoT. Whereas in Asia water conservation, air quality and traffic control are key applications, because of the different states of society.”

Seated alongside a senior system integrator (SI), James Loo (second from right, above), CIO of the telco-based, SingTel Group Enterprise injected a note of controversy when he said, “We need a new breed of SI to understand IoT. An SI capability is needed in putting (IoT) together and putting it in touch with customers.”

Accenture’s Mayberry (pictured third from right, above) was quick to reply. “Looking at systems integration from a skills point of view there are a lot of new disciplines to understand, in energy, smart cities and so on. There are talented people with those skills; we have to assemble an ecosystem to drive the business. It’s a great opportunity for SIs,” he said.

Clearly Cisco also sees the opportunity, and the company’s Hardik Bhatt, director of Global Market Development, Internet of Everything (IoE) for Cities confirmed it. “We will build, buy and partner software and services-based city solutions.” That’s no surprise when you hear that Cisco estimates smart cities to be a US$2 trillion opportunity over the next few years.

Cisco has already announced a $100 million IoE investment fund, with investments to be made in commercial projects. “We want to look for horizontal platforms,” Bhatt added, “not vertical solutions.”

With that sort of money on offer from Cisco and large sums in Qualcomm’s war chest both companies will be getting offers. However, in a market as young as IoT, it remains to be seen how well proven or mature those platforms will be.