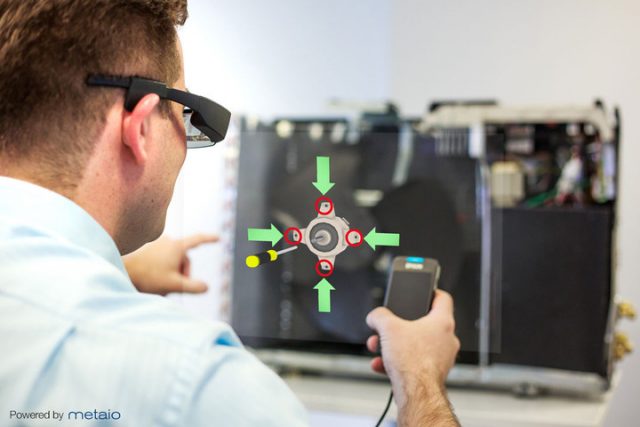 Munich, Germany and San Francisco, California, USA, May 6, 2014 – Metaio, a leader in augmented reality (AR) software and solutions, has announced the first ever “see-through” wearable AR capabilities through the newest Beta version of the Metaio SDK, now optimised for wearable computing devices like the brand-new Epson Moverio BT-200. Instead of utilising a camera view, Metaio’s technology allows the user to perceive reality itself with digital and virtual content directly overlaid onto their surroundings.

Wearable computing is on the rise, with devices like Google Glass and Oculus Rift in the public eye more and more. But in order to perform augmented reality experiences, even transparent displays like Google Glass rely on a camera video feed that duplicates reality rather than using the reality itself, potentially creating a disconnect for the user between the augmented content and the real world.

“We strive for seamless wearable AR,” said Metaio CTO Peter Meier. “We want to go beyond the limitations of form factors to deliver truly ground-breaking experiences.”

The Metaio Augmented Reality SDK, now serving 80,000 developers, is today equipped with optical, truly transparent augmented reality rendering, allowing users to view AR content as if it were in front of their eyes. Service technicians can now visualise digital maintenance information attached to systems as if it were there in real life; consumers can visualise product information in-store or at home; game developers can create immersive games that merge virtual and physical worlds.

In addition to true see-through AR, the newest version of the Metaio SDK will feature high-definition rendering for iOS devices along with brand new in-Beta Face Detection algorithms.