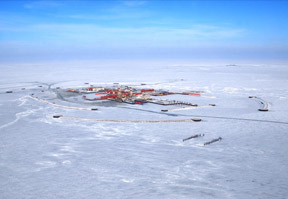 The oil & gas industry brings challenges unlike any other in machine-to-machine (M2M) communications. Onshore installations can be hazardous enough in temperatures of -60 or +40 deg Celsius, or in flammable and ‘sour’ hydrogen sulphide (H2S) environments. Then factor in locations hundreds of miles offshore and you have the Mother of all communications challenges, writes Jeremy Cowan.

A recent event in London, M2M for Oil & Gas, explored some of the key issues surrounding M2M and the Internet of Things (IoT) in such environments. Aside from the difficulties already mentioned, Berry Mulder, team leader Shell’s ‘Frontier Automation’ at Shell Projects & Technology, pointed out that offshore facilities have strict limitations on the number of people onboard, so machine automation is especially desirable yet ease of deployment and sustainability become crucial.”

Humans are not well suited to working in plus or minus 40 degrees Celsius, even less so where H2S is present in the oil & gas. By far the largest industrial route to H2S occurs in petroleum refineries where the hydrodesulphurisation process liberates sulphur from petroleum. H2S is a colourless gas with the odour of rotten eggs; it is heavier than air, poisonous, corrosive, flammable, and explosive. In such circumstances, repair and maintenance tasks require workers to don highly restrictive breathing apparatus that would be difficult to use in temperate climes, to eliminate the risk that there would not be time to put on a gas mask in the event of a sudden leak. In 40 deg heat or above it is debilitating in as little as 20 minutes, making remote monitoring and control via M2M mission-critical.

“The bottom line,” says Mulder, “is moving people away from hazardous activities.” So Shell is developing the Smart Mobile Worker initiative. Features include:
* Location awareness – RFID (radio frequency identification) tags ensure that workers can be located in an emergency
* Wireless fire and gas detection – M2M infrastructure shows when people are still in a risk area, and shows their movement
* Wireless video – Adding a few thousand cameras on site may improve the operational view but it puts a bandwidth burden on the network and the cameras are still fixed. So Shell is working towards mobility.

One tool for this is the Sensabot, a remotely-operated mobile robot for monitoring and inspecting industrial facilities. The Sensabot is designed to be rugged and to perform a wide variety of tasks in hazardous environments, isolated facilities, in fact anywhere that is difficult or dangerous to access. Developed by the National Robotics Engineering Center (NREC) in Pittsburgh, USA, Sensabot features a mobile robotic base with a sensor boom tipped with inspection sensors.  It can operate in extreme temperatures and explosive and toxic atmospheres.  A human operator remotely drives Sensabot and uses its sensors to inspect pipes, fittings, and valves. It meets IECEx Zone 1 standards for explosive environments and ANSI safety standards for guided industrial vehicles.

Said Mulder: “Sensabot replicates sensors on a human being and is designed to access the same areas as a human. Contrary to common fears, we don’t think it’s taking away jobs from people but merely moving people away from areas of risk. Actually, with the introduction of more robotics, we expect that whole new industrial services will emerge in the local communities.”

Another speaker from the oil & gas production sector was Blaine Tookey, senior technology consultant in the CTO’s office at BP. He said: “Over the last few years I’ve seen good M2M ideas founder on business models.” The best sources of digital innovation, in his view, are outside oil & gas which is “so conservative”. They come from start-ups, technology firms, consumer markets and the military. “We can bring these ideas into BP. It’s usually 18 months from first awareness to business adoption. We get into all technologies, and all BP businesses.

“One example is ‘Track & Trace’ based on M2M technologies, determining where and how an asset is – whether it’s people or equipment – and doing it for safety, integrity, visibility, and measurability. This is a huge part of what we do; reducing costs and optimising operations. Ultimately, Track & Trace involved 37 projects delivering US$150 million of value across BP’s business,” said Tookey.

BP found particular value in tracking high value equipment in open spaces, and in supply chain tracking. Tracking on Alaska’s North Slope is particularly important with expensive equipment specified to -60 deg C. This temperature kills batteries so standard telematics services have to be ruggedised. There are no cellular services here, so BP is reliant on satellite communications. IN Alaska alone, Tookey’s team was able to generate $7 million in annual savings by reducing equipment rental, hoarding and rental billing disputes.

“Sensabot is not taking away jobs from people but moving people away from areas of risk.”
Berry Mulder, Shell

In Claire Ridge supply chain tracking off the UK’s Shetland Isles, there is $1.6 billion worth of equipment from 150 vendors. The project team needed and received real-time visibility with radio RF (radio frequency) tagging. BP even used advanced NASA-developed technology in their tracking system to locate weak signals. Since its installation, said Tookey, no tracked equipment has gone missing from Claire Ridge.

For field force automation, BP is now using Zone 1-certified smartphones and personal digital assistants (PDAs) with big screens and internet connectivity. This is important because the company start to use Bluetooth or Near Field Communications (NFC). Connectivity in real time is not always necessary. Said Tookey: “With $5 Bluetooth-enabled sensors I can give a solution to monitor equipment health with M2M.”

Data analytics is now said to be at the top of the hype cycle. According to Tookey, “A lot of our businesses collect data and it’s not always structured. The task for us is getting sensors in place and collecting it for a period of years so that we can analyse it and learn from it. It’s about managing that infrastructure of solution providers, and the Big Data Analysis companies all say they’re better at it than each other.”

Cellular GSM and satellite communications were not the only technologies under discussion.  Professor William Webb, co-founder of Neul and president-elect of the IET, spoke in his role as chairman of Weightless.org. As this body points out, the M2M market today is only a fraction of the predicted 50 billion connected devices. This is partly due to the lack of a ubiquitous wireless standard that meets the needs of the vast majority of the machine market. The industry needs low cost communications, with excellent coverage, ultra low power operations, and secure, guaranteed message delivery.

Weightless promotes shared access to “white space” spectrum that it says is near perfect for M2M.
The spectrum is unused but standardised for TV services, operates in low frequencies over long distances, and at the moment is unlicensed and therefore free. “So it seemed sensible,” said Webb, “to come up with standards.” In future there will be an enormous number of devices in a cell, but current (GSM) cellular services can only cope with hundreds of devices. A weightless cell architecture could handle hundreds of thousands of devices.

The oil & gas industry presents tough challenges. It needs ubiquitous coverage, sometimes indoors or underground, low transmission power, and a small number of cells, all of which suit weightless technology. Weightless has taken a major step forward, according to Webb, with the announcement of its roadmap for the five key hardware components to enable the ecosystem, silicon, modules, development kits, base stations and deployed networks.

To overcome this, Eurotech offers multi-service gateway devices and the Everyware Cloud M2M integration platform to provide new businesses and entrepreneurs with the infrastructure to develop and test new technology and applications. The goal is for systems “to collaborate on Process, Supply Chain, Logistics, and Customer Relationship Management, with a common infrastructure,” said Taberner.  “We have created an M2M Integration Platform either for a ‘Walled Garden’ or an open ecosystem.”