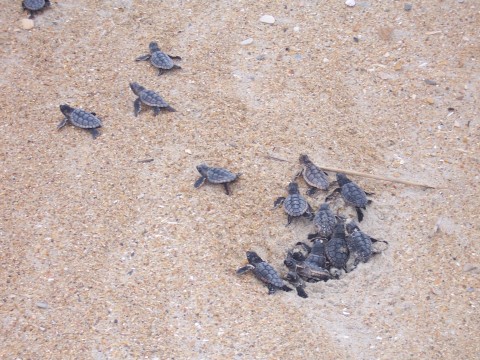 London, UK, (Business Wire), May 15, 2014 – Telit Wireless Solutions, a global provider of M2M solutions, products and services, has announced that Turtle Sense, a project designed to accurately predict when sea turtles hatch and emerge from their nests, will integrate Telit HE910 modules to communicate sensor data with the ultimate goal of protecting both the threatened and endangered sea turtles and the area’s critical tourism industry.

The Turtle Sense technology was developed by Nerds-Without-Borders, an organisation that believes thoughtful people, acting without self-interest and working collaboratively, can solve many of the world’s problems.

Because coastal economies rely heavily on tourism from public access to beaches, business and environmental interests must balance the popularity of coastal towns with requirements for the preservation of sea turtle nesting areas prescribed in The Endangered Species Act.

Cape Hatteras National Seashore is located off the North Carolina coast in the United States. Nesting female sea turtles return to the beaches where they were born to lay their eggs. Months later, tiny turtles struggle out of their shells, out of their nest, and move toward the ocean. Today, when a sea turtle nest is found on the beach, a small enclosure is built around the nest to keep pedestrians and vehicles away. About 50 to 55 days later, the nest closure is expanded, often closing the beach to vehicular traffic. Currently there is no reliable way to predict when the tiny turtles will emerge from their nests near the dune line and parade to the surf. As a result, closures sometimes last more than a month.

Eric Kaplan, founder of the non-profit Hatteras Island Ocean Center and chairman of a technology company, has proposed a solution based on M2M communications technology that will help predict the hatching and emergence events and, in turn, minimise the number of days when large portions of the beach are blocked. First generation technology was tested in 2013 on four nests. This summer about 20 nests will be monitored using second generation technology.

The design is based on Telit’s HE910 modules, which are incorporated in Janus plug-in Terminus modems. Cable connections are made to sensors that are buried in the nests: they measure temperature and movement. The sensors are controlled by a microprocessor, which communicates with a second microprocessor on the modem, which in turn transfers the sensor data to the HE910, ultimately transmitting it to the cloud over the m2mAIR Mobile cellular network.

In order to extend battery life throughout the nesting, incubation and hatching period, transmission timing starts slow and intermittent and increases in frequency once activity is reported. “Through the use of this innovative technology, Cape Hatteras National Seashore is hoping to be able to accurately predict sea turtle hatching and emergence,” said National Park Service wildlife biologist Britta Muiznieks. “Previous studies have been unsuccessful on predicting these events with reliable accuracy.”

“Telit has a long-standing tradition of collaborating with organisations like Hatteras Island Ocean Center,” said Mike Ueland, President of Telit Americas. “Along with products and technical assistance, Telit also looks for ways to create awareness for projects like this innovative, environmentally-conscious solution.”