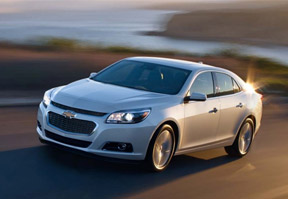 OnStar ushers in a new generation of connected vehicles next month with in-vehicle 4G LTE, which launches with a trial period of three months or three gigabytes, whichever comes first.

The 2015 Chevrolet Malibu will be the first 4G LTE-equipped GM vehicle, followed by more than 30 other Chevrolet, Buick, GMC and Cadillac vehicles by the end of the year.

The industry’s broadest deployment of 4G LTE connectivity technology will enable owners of these vehicles to explore new features like a built-in Wi-Fi hotspot capable of pairing up to seven devices, as well as improved access to existing OnStar safety and security services. It’s the most comprehensive in-vehicle safety and connectivity system available.

OnStar with 4G LTE brings a built-in Wi-Fi hotspot into and around the vehicle. Pairable devices can include properly equipped laptop computers, smartphones, video game consoles or tablets. According to Strategy Analytics, 74 percent of tablets sold this year will be Wi-Fi only and as many as 91 percent in North America will be used with Wi-Fi as their only connection, meaning some cellular-enabled tablets do not have an active data plan. In most cases, OnStar’s 4G LTE and Wi-Fi hardware come as standard equipment.

“Chevrolet, Buick, GMC and Cadillac will be the first vehicle brands to market with 4G LTE connectivity offered on such a broad scale, and we’re excited to give millions of customers an opportunity to explore the technology without paying extra for a data plan for three months or three gigabytes,” said OnStar President Mary Chan. “Later this year, we will begin to offer data plans and our customers will be able to connect for as little as $5 per month.”

Customers using OnStar with 4G LTE can take advantage of a powerful antenna that’s stronger than that of a smartphone, along with a Wi-Fi hotspot that operates without draining a mobile device’s battery. That hotspot is on any time the car is on.

Drivers who subscribe to OnStar Safe & Sound or Directions & Connections plans already get a comprehensive suite of safety and security services, and later this year, for $5 more per month, they will be able to get 200 megabytes of data, enough to stream more than 6.5 hours of music, surf the internet for 13 hours or send more than 10,000 emails without attachments, according to AT&T’s data usage calculator.

When data plans are launched later this year, pricing for OnStar customers not subscribed to advisor-based services will start at $10 per month. Additional U.S. pricing is charted below. Pricing for Canadian and fleet customers will be announced separately.

For existing AT&T customers, a 4G LTE-equipped GM vehicle can be added to a Mobile Share Plan for $10 per month.

OnStar data plan subscribers will also have the opportunity to access special offers from content partners, such as Famigo and TumblebooksTV, for brought-in devices. Famigo provides safe, fun and educational on-the-go entertainment for kids on smartphones and tablets. Included with the no-additional-cost Famigo Basic membership ($12 annual value) is exclusive content and child-friendly games, videos, apps and books for the duration of the vehicle’s active data subscription.

TumblebooksTV by ES3, an app offering hundreds of read-a-long video-animation storybooks that provides family-friendly educational fun for the backseat, will offer a 30-day trial to OnStar data customers.  After the trial has concluded, data plan subscribers can retain access to five predefined books at no additional charge.

“OnStar with 4G LTE is embedded into the vehicle, meaning customers get simple connectivity for not only a Wi-Fi hotspot, but also improved access to traditional OnStar services like vehicle diagnostics, remote vehicle access, and others,” said Chan. “Our customers will also have easy-to-understand data plans to let them tailor a connected car experience around each owner’s lifestyle.”

The new OnStar Basic Plan includes RemoteLink Key Fob Services, allowing owners to remotely start and lock/unlock a car, and activate the horn and lights from a compatible smartphone with a data connection. It also includes OnStar Vehicle Diagnostics where OnStar which runs monthly checks of select systems in a vehicle’s engine, transmission, antilock brakes and more, and Dealer Maintenance Notification, which sends a diagnostic report directly to a preferred dealer to make service scheduling simple for the customer.