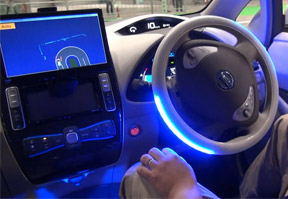 Once the preserve of the executive limousine, connected vehicle technology is reaching ever deeper into the car market. But what are the challenges faced in connecting vehicles to the internet and in vehicle-to-vehicle communications? M2M Now talks to Oozi Cats, CEO of Telit, a company with the stated goal of becoming the market leading supplier of automotive-grade modules.

Oozi Cats, Telit: The answer to the first question is yes and to date the services they enable are a standard feature on up-market brands like Audi, BMW and Mercedes Benz, but in recent years they are increasingly found on mid-range cars.

LTE is the preferred network for two reasons. One, its intrinsic efficiency enables the simultaneous delivery of an array of entertainment, traffic, navigation, maintenance and safety features. And two, operators are going to retire networks such as 2G that are less  efficient and in the States this process has already started. Therefore, by deploying LTE on-board platforms auto makers will avoid premature obsolescence.

And of course electric cars rely on the in-car systems. Reliable data is obviously needed in order to check on the status of the batteries and when on a journey, to indicate when and where they should be recharged. This is a good example of the combination of vehicular data with information retrieved from a cloud-based service platform.

Right now LTE services are not ubiquitous in most markets, but it’s only a question of when, not if. When the on-board platform cannot find an  LTE network it will fall back to 3G and services will continue, but the quality of streaming video will obviously be diminished.

Used car owners can connect a dongle to the vehicle’s OBD port and obtain a number of services such as eCall, stolen vehicle recovery and usage-based insurance. However this is not a practical proposition for entertainment services. Currently, there is a mix of services such as eCall that employ low data rate connectivity as well as driver-oriented services like infotainment that employ high speed connections. The technology that will enable convergence will be LTE, particularly when Voice over LTE is rolled out in all networks.

M2M Now: The US Department of Transportation recently announced that it might require car makers to equip new vehicles with technology that enables vehicles to communicate with each other to prevent collisions. Could this also drive the adoption of the Internet-connected car?

OC: The German and French governments as well as the European Commission are also researching this development. Looking further down the Internet-connected car road we have two key developments: V2X and ADAS. V2X comprises communications between vehicles as well as vehicle-toinfrastructure services. Basically V2X creates an awareness zone around the driver’s vehicle: You can think of it as a wireless LAN. Initially, vehicle-to-infrastructure services will focus on warnings as well as safety issues such as blind spots, lane departure and oncoming vehicle.

ADAS – advanced driver assistance systems – takes in various road safety applications, many of which are on the cutting edge of emerging automotive technologies. Adaptive light control systems, for example, retrieve route information and allow the headlights to swivel and rotate to better illuminate bends just before they arrive. Features like adapted speed and braking technologies are also emerging, along with controlled steering and autonomous driving. Longer term, the technological advances behind the internet-connected car will eventually lead to self-driving vehicles.

M2M Now: How are GNSS product requirements evolving for the automotive industry? And how are suppliers like Telit responding?

OC: Like most things in our industry GNSS is evolving at an amazing speed. Deployment is largely a result of legislation regarding driver safety. Different regional legislations mandate different GNSS technologies: Europe, the Middle East & Africa (EMEA) will go for GPS/Galileo; China is mandating Compass / Beidou; Russia has GLONASS. Telit has an on-going programme that matches and anticipates these developments, for example, our Jupiter SL871 supports four constellations. We provide the relevant technologies in a seamless way, either as a standalone module, or fully integrated in cellular plus GNSS combo devices. Our product strategy is to have a bestin- class offer in every technology sector.

Location has become a utility, both inside and outside the car. Units often display moving maps and information about location, speed, direction, nearby streets and points of interest. Outside the automotive industry there’s also an accelerating demand for location-based services products such as smart watches, personally connected healthcare devices and other wearable products.

In addition Telit has developed m2mLOCATE a unique location-based service that gives Telit cellular module users an additional means of obtaining a location fix. The service derives device position from a triangulation process, which uses cellular base-stations as references. It provides basic position data in all indoor situations such as garages and tunnels.

Services are obviously based on a user’s geographic location, but if you think about it they answer three basic questions. One, where am I? Two, what’s around me? And three, how do I get to where I want to be? Or, in the case of some emergency services, how do others get to me?

Regular GPS is already providing answers, but the introduction of hybrid positioning and multi-GNSS services is set to guarantee the availability of the location information in all conditions and also to enable the creation of an entirely new breed of applications.

M2M Now: How does the acquisition of NXP’s automotive on-board platform strengthen your offer and why did you create a new business unit, Telit Automotive Solutions?

OC: NXP’s on-board platform is an integrated, certified component that has all the functionality needed to create standalone On-Board Units – OBUs. Integration is enabled by a comprehensive range of interfaces and ATOP (Telit’s automotive platform) can also be employed as a front-end to more advanced, open-service telematics platforms.

In a nutshell, it’s an impressive single-component turnkey solution having tight hardware and software integration. ATOP should therefore be seen as a complementary addition to our comprehensive portfolio of dedicated automotive modules. They will continue to be the preferred option for many vehicle manufacturers and we shall continue to develop the existing product line.

Telit is an established supplier of automotivegrade modules, but given the size of the market
and its potential, Telit decided that a dedicated business unit would allow the company to better
address all those opportunities. This focused approach would also facilitate the execution of our strategy, which is to become the market leader in the automotive segment by 2015. The acquisition of ATOP should therefore be seen as a significant step towards the realisation of that objective as well as another extension of our ONE STOP. ONE SHOP. simplification model – with this addition representing simplification for our Automotive OEM customers.

M2M Now: There is much talk about the vulnerability of connected cars to cyber attacks. What can the M2M industry do to alleviate this concern?

OC: There is a growing awareness about the threat of cyber attacks and their impact on the safety of the occupants, especially when we get vehicle-to-vehicle communication and autonomous driving. Manufacturers and governments are aware that vehicles are vulnerable to hacking and it is particularly true for cars that are connected to the internet. There haven’t been any reports of cars being hacked, but researchers have proved during live road tests that these wireless attacks can work.

Various security initiatives are addressing this issue. At Mobile World Congress we presented m2mAIR Shield, which is a concept service that will be launched later this year. The Shield runs in the module and is able to detect when a device is under attack. It monitors the traffic, either SMS or  data, and allows recognised traffic to go through. The Shield also monitors the cellular environment and detects threats.

A security policy chooses whether to block the suspicious communication. For example, when a fake cell is identified, all traffic is blocked: it puts the device on lockdown. The Shield identifies the event, logs it, manages a policy around it and sends an alert to the m2mAIR Shield backen server as soon as a clean connection can be established. The report is visualised on the m2mAIR Shield administrator and end customers’ dashboard, informing them about the attack and the action taken.

This indicates that Telit is doing more than alleviating the market’s concern about cyber attacks. By embedding security software into our 910- module family we will stifle the attack at its source.

M2M Now: How will software evolution instead of customised M2M hardware affect telematic solutions? Will robust hardware platforms have the required baseline functionality, with customisation coming though FOTA and OTA?

OC: All our modules, as well as the backend services, can be updated over the air. In addition application firmware outside the module can be updated by our solution. This is not a new concept but it will be employed more and more in future: in fact, it’s the only way to go. In addition, we pioneered the ability to programme modules in order to run all or part of the application on the device.

The importance of embedding and running software applications on M2M modules led to the introduction of modules that support an innovative feature called Easy Script. This allows customers to run their applications on the Telit modules and to write the app in Python. Easy Script is a complete software platform. No additional investment in hardware and license fees is needed.

Embedded hardware has to stay in place for the lifetime of the vehicle, which means that it has to employ all the functionality needed for all foreseeable solutions and that is exactly what ATOP offers. The interfaces I mentioned earlier include CAN and USB, multiple serial interprocessor buses, and A/D and D/A converters. Telit will continue to evolve the development of programmable systems on next-generation automotive platforms like ATOP, which has been designed to facilitate downloading the rest of the application logic over the air and in this way to update secure, fault hardened schemes.