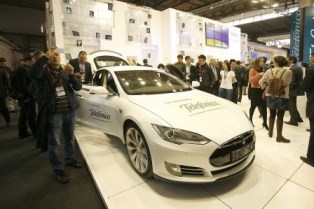 London, UK — In the second of its annual Connected Car Industry reports, network operator Telefónica has explored the attitudes of 5,000 drivers towards car connectivity, adding insights from industry experts. The report shows that consumer awareness globally of connected car products and services is now high enough to influence purchasing decisions.

The term ‘connected car’ has been a buzz phrase within the automotive industry for several years, but for a long time the question has been, are consumers ready? Research newly released from the tier one network operator now suggests they are. According to Telefónica’s latest annual study, there is sufficient global demand for connected car services, with more than 70% of all drivers surveyed saying that they are interested in using, or are already using, connected car services.

Pavan Mathew, global head of Connected Car at Telefónica, told M2M Now: “This year we talked to 5,000 consumers to see what their expectations were, especially about new services and especially in emerging markets. The key issues in the US and Europe were safety and security, for help in case of accident or breakdown. In Brazil it was more around stolen vehicle tracking. Vehicle choice 10 years ago would have been focused on design, price, look, feel, performance and safety. Now connectivity is becoming a top 10 item.”

In fact, around half of consumers now consider connected features, such as in-built connectivity and the ability to plug in a smartphone, to be a key part of their next car purchase. Features such as increased safety, early warning systems and smarter navigation are the most popular, with almost three-quarters (73%) of drivers listing safety and diagnostics features as the most important.

Paying for these services is also coming under greater scrutiny. “Do you build it into the vehicle price, or do you bill monthly?” Mathew asked. The dominant model is a fixed time period, of a year or six months, said Mathew, with further discussion at the end of the period when the user has tried the service.

But is this model proving successful? M2M Now recently quoted Steve Millstein of Aeris Communications (May 2014 issue, Automotive issue, pages 38-40) who said: “Car companies put hardware in the car and after the free period, let’s say that’s one year, the renewal rates are somewhere between single digits and 30% if they’re lucky. That clearly shows the business model doesn’t make sense, either to drivers or the car companies. If vehicle connectivity is only available on the top brands and only 10% (of users) keep it lighted because of the subscription model you’re not going to change the way you sell and service cars.”

We put this to Mathew who replied: “I think (renewal rates) are a lot higher. You’re right, there are challenges but there are certain players in the industry that have been very successful, where renewal rates are significantly higher, high enough for it to be profitable. The way they have enjoyed those rates is by having a strong CRM (customer relationship management) team, understanding where the consumers are in the lifecycle, having the right set of services, and segmenting or unbundling those services in a manner that consumers understand and fits their lifestyle. There are some providers who are not seeing this success.”

“Which companies do it well?” asked M2M Now.

“I think OnStar does well. They will tell you they’re pretty satisfied with their renewal rates. That’s an example of a telematics service provider that has done well in that model.”

Exactly four our of five consumers (80%) expect the connected car of the future to provide the same connected experience they are used to at home, at work and on the move via their mobile phone. Increased safety, early warning systems, smarter navigation and usage-based insurance (UBI) are cited as the most popular benefits of connectivity in cars.

The findings have been unveiled as part of Telefónica’s Connected Car Industry Report 2014 featuring independent primary research and contributions from six of the world’s largest car manufacturers. The report builds on some of the topics covered in Telefónica’s inaugural Connected Car study from 2013 which predicted that that the number of vehicles with built-in connectivity would increase from 10% of the overall market in 2013 to 90% by 2020. This second report gives insight from a driver’s perspective into the car industry’s biggest transformation in more than a century, detailing the opportunities, challenges and predicted trends for the sector.

Pavan Mathew added: “Through looking at the connected car from a driver’s perspective, it’s clear that the demand for connected services in cars is unquestionable. Even though we’re just moving off of the starting line, people are ready for it and know what they want. But challenges to widespread roll-out remain.

“Many consumers currently think of connected car services in terms infotainment and WiFi, but this changes when they are made aware of the variety of options that the technology can offer. Safety and diagnostics appear to be the most attractive features to drivers, illustrating just how important factors such as road safety and vehicle maintenance are in consumer purchasing decisions.

“We can expect to see a gradual creep of connectivity into vehicles over the next few years but there won’t be an explosion over the next 12 months,” said Mathew. “The reason for this lies in the complexity of the challenges that connectivity is trying to address. While OEMs (original equipment manufacturers) still have a way to go before they break out of their traditional role as a manufacturer and become a full, connected service provider, they certainly have a strong, trusted base to build from.”

Earlier this year Telefónica announced an agreement with Tesla, the world’s leading electric vehicle (EV) manufacturer, to provide connectivity for the Tesla Model S in Europe.

Speaking on the subject of vehicle connectivity, Henry Bzeih, chief technology strategist at Kia Motors, said: “I see a huge expansion beyond legacy telematics such as vehicle health reports, safety and security, crash notifications into active safety and automated driving aspects. I also think vehicle-to-vehicle communication is going to grow very quickly in the next five years. The beauty of that technology is that the communication protocol can be used for a host of other services beyond vehicle communication, so it benefits the wider infrastructure too.”

Greg Ross, director of Product Strategy and Infotainment, GM, looked at the wider picture. He said: “For us it comes down to the things that make the car a better vehicle. When we talk to customers about connectivity they say, ‘Well, it’s a car and so what I need it to do are the things I bought a car for’.  They want it to be safer, more intelligent and more economical. Connectivity is a chance for OEMs to look at how we can help to reduce costs for customers and make cost of ownership lower by giving advice on how to drive more fuel efficiently, or helping you find the lowest cost source of fuel or the most efficient route. By providing data for things like usage based insurance or pay-as-you-drive insurance, can I save you money on insurance?”

To read the report in full (in English, Spanish or German) go to:
http://blog.digital.telefonica.com/tag/connected-cars/