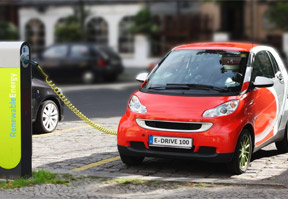 While the technology of electric transportation as a whole, and batteries in particular, is evolving very quickly, one of the biggest impediments for consumers in purchasing an electric vehicle is the so-called ‘range anxiety’. The batteries in electric vehicles run flat at a fast pace, causing the driver concern about where it can be recharged. The key to overcoming this obstacle is to increase the number of charging stations that are publicly available. We face here a typical chicken and the egg problem: with few electric vehicles, there is no real business incentive for commercial companies to build infrastructure, and without charging stations consumers refrain from buying an electric vehicle. Based on the experiences of countries where electric transportation has been successful, there was always enough supply of public chargers. Therefore, public infrastructure should be installed before the rollout of vehicles, at least to a certain extent, in order to relieve anxiety.

Preparing future large scale electric transportation deployment, it is imperative to focus on sustainable policies to support both infrastructure and vehicle deployment. In several countries where promotion for alternative fuel vehicles failed, incentives phased out too early, before successful introduction and before the market could stand on its own feet. However, countries that succeeded in promoting alternative fuel vehicles also succeeded in supporting infrastructure for the new fuel. In other words, if we decide to support the introduction of electric transportation, we must consider the rollout of sustainable policies, aptly mixed for each country. They need to be continued throughout the introduction stage, and afterwards they should be carefully and gradually phase out.

Various evolutions resulting from the interaction between technology producers and the safety restrictions of different power grids have resulted in the development of different standards for different countries and different brands. However, vehicles are global products, rolling in and out of countries, making interoperability and standardisation of these interfaces imperative.

Many countries are currently testing how to integrate electric vehicles into the grids and into their country’s economic structures. Global Smart Grid Federation recommends that countries share their experiences and grid analyses with each other. Now that technologies for electric vehicles, through demonstration programs everywhere, have proved themselves to be geared up to go, it is necessary to consider and share information about cases that might enhance the value of electric vehicles, in addition to looking into the usage data. These analyses will lead the way to new possibilities for the user and for promoting electric vehicles.