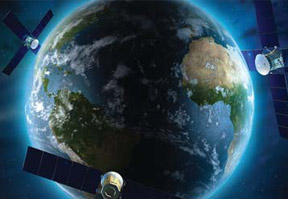 Speaking to M2M Now as ORBCOMM is preparing to launch its next generation OG2 satellite constellation, chief executive officer Marc Eisenberg, explained why satellite isn’t just an expensive alternative to terrestrial communications in hard to reach locations. Eisenberg, who joined ORBCOMM in 2002 and has served in a variety of roles before being promoted to chief executive officer in 2008, says the new constellation’s radically increased capability will bring down the cost of many services and bring it more in line with terrestrial alternatives.

However, price only scratches the surface of what can be achieved for ORBCOMM as the M2M market remains at a relatively early stage and huge growth is expected. As one of the few companies serving the market to have significant scale, Eisenberg says ORBCOMM will continue its strategy of build, buy and partner to grow further and serve the market comprehensively.

M2M Now: How will your OG2 satellite launch impact your M2M business?

Marc Eisenberg: We planned the launch for many years because we recognised the need to expand on the capabilities of our first constellation of satellites which has been running since the mid-1990s. Of course, since then there have been quantum leaps in technology but putting a new constellation into orbit is not the work of a few months.

First we had to raise funding for the new constellation and then work through technical and launch plans. We signed contracts for construction of the satellites in 2008 and signed the contract for the rocket launch in 2009. The first constellation of 25 satellites is fine but there are all sorts of new features that a new constellation can provide.

The new constellation will offer many times more capacity and higher gain. We’re really excited to get it up there.

That’s because historically satellite services suffered from latency but with the ability of OG2 to deliver larger packets we’ll be able to offer something that nobody else has. Terrestrial communications have their advantages in terms of bandwidth but satellite has its strengths as well. For example, terrestrial providers measure coverage in terms of population, and satellite providers measure in geography covered. We also can offer excellent backwards compatibility. Caterpillar, for instance, started deploying M2M communications in its products in 1995, and those are still working. The terrestrial market, in contrast, has gone through many technical generations since then and that can be extremely painful for companies with items out in the field.

M2M Now: What advantages will the new constellation bring?

ME: A current OG1 satellite has one transmitter and six receivers but OG2 will have six transmitters and 48 receivers so we’re automatically at 12 times capacity. However, we’ve also drastically improved the protocol to expand the capacity. Once you have 48 receivers you won’t be able to fill it with the current business. You could track every tractor and trailer on earth.

In addition, we’ve created backward compatibility so the constellation will be available to the installed base, and we’ve added the capability of being able to service really large messages. We are going to slow the message speed down and improve the gain indoors – no one else is looking at indoor applications.

M2M Now: Satellite is known to be an expensive solution, does that hold it back in the M2M market?

ME: The reason that satellite’s share of the M2M market has fallen is purely to do with cost. If you look at the applications out there, the satellite price was always a massive barrier. For instance, if you offer tracking via satellite versus cellular, you’ll get 86% of the functionality of satellite for $10 a month. However, if you want to receive 100% of your messages by using satellite, the cost will be $40. The customer makes an economic decision.

With OG2, which we’ll get launched for $200 million, it’s not going to be such a large economic decision because instead of $40, the cost might turn out to be around $12 a month. We think that will change the decision profile for the entire M2M industry. In addition, we’ll see more partnerships between cellular operators and satellite providers to support M2M projects. We’ve partnered with Verizon, Rogers and T-Mobile so we can offer multi-technology propositions.

M2M Now: What role is ORBCOMM trying to fill in the M2M industry?

ME: We’ve certainly changed our business model and now run two businesses. One is the satellite network business and the other is the services business. We operate them both so, through one portal and one connection, you can mix and match technologies. For example, you can get Inmarsat and AT&T on a particular price plan.

We’re enabling that because we see four key competencies being in demand in the M2M market. The first is network capability, the second is device management to help control devices, set locks and limits and provide bundles of airtime, the third is hardware to try and build platforms for use across multiple verticals, and the fourth is to create return on investment on bits and bytes processed through a web portal.

Lots of companies do these things but we can do one or all of these things for you in a far more sophisticated way than others. However, we are a large-scale operation. We’re not very good at selling five units but we’re great at selling 5,000. Using our 110 technical resources, we like to build something customised for the market and large projects make that viable and valuable.

M2M Now: Why does ORBCOMM need to offer service from other networks?

ME: It comes back to the nature of satellite communications. Customers want reliable products and need to hit their price points, and we need to deliver the best solutions for them. That might be a hybrid of satellite or terrestrial communications or it might be a satellite provider that covers a geography that our satellites do not. For instance, we partner with Inmarsat and that’s a perfect solution because we work at different latitudes, we market well in the US and Japan and they are larger in Europe. We want to give people options and that’s why we’ve done so many deals with partners.

M2M Now: What are ORBCOMM’s plans for global expansion?

ME: We’ve got a build, buy or partner model. On the build side, we build products that we are looking to deploy globally. In partnering, we’ve definitely moved forward, whether that’s with Inmarsat, cellular operators or with partners in Japan and South Korea.

We’ve acquired six companies over the last few years and acquired Euroscan in the Netherlands which distributes in Germany as well. What a perfect opportunity that has created for Euroscan to bring its products to North America and to take our products and distribute them in Europe.

Earlier, it had been a struggle to sell in Europe because we didn’t have the support but with Euroscan we have 45 people in Europe to help us deploy there.

M2M Now: In addition to your constellations of satellites, what other benefits are there in dealing with ORBCOMM as opposed to other offerings?

ME: ORBCOMM gives customers the perfect combination to enable them to address their needs across multiple products. We can service the whole gamut of needs, no one else can do that. Either ORBCOMM, or our partners have a product that will service the entire transport market.

We give such an incredible choice of options and can serve across multiple continents. We’re one of the few companies that has scale in this market and that means we can hit price points and deploy across multiple regulatory environments. We’re a low risk solution with a great set of options.

M2M Now: What’s next for ORBCOMM?

ME: We’re going to grow. We’re very aggressive and entrepreneurial and have had a very successful strategy of building, buying and partnering. However, there is a still a good portion of the globe we can expand to and that gives us attractive room for further growth. Add to that, that we’re an acquisitive company, and it’s clear that we will continue to grow.

However, it’s not just about footprint and acquiring companies. We have an absolutely huge advantage in being able to provide our customers with a single platform that is backwards compatible. Caterpillar, for example, has its M2M offering built on one platform and, while its competitors were switching out analogue units, those in the CAT equipment still work.

The next step for us will be to work more closely with the original equipment manufacturers, and we are building our relationships in the plant market. Doosan, for example, is a dual-mode customer and uses ORBCOMM to provide both. It has one price for everything so all it has to do is deliver excavators.

Another key point of comfort for large organisations like these is that we share a similar scale with them. Last year we achieved revenues of $74 million and we are guided to generate $100 million this year. That scale means we are increasingly well situated in this growing industry and poised to grow further as the industry develops and matures.