Home › IoT News › Complex logistical challenges must be made to disappear 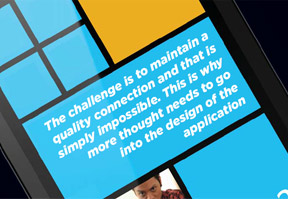 A lot of hard engineering graft goes into making technology look simple. On Demand Connectivity is a case in point and the process of creating open communications without compromising security needs constant fine-tuning, writes Nick Booth.

Before we can achieve mass adoption of machine to machine (M2M) communications, M2M must be made simple to use. With multiple devices and their multiple profiles creating some complex logistical challenges, today’s M2M pioneers will have to work very hard to make service provision look effortless.

It’s a battle being fought on two fronts, by companies like Gemalto and Giesecke & Devrient (G&D). These early adopters strive to manage existing M2M communication services, while designing new systems that will meet demand for services on the many new connected devices that are being spawned.

There will be at least $100 billion in revenues to be made annually in this area by 2016, according to analyst firm IDC. So, as other service providers are attracted, it is instructive to observe how the market leaders have begun to wrestle with the engineering challenge.

Gemalto’s approach to On Demand Connectivity is to bring unity by turning multiple products with multiple profiles for multiple locations into one product that can be personalised by the user.

Smart though a Universal Integrated Circuit Card (UICC) has the potential to be, it is only as intelligent as the company that programmes it. Sometimes it is the functions that are left out that are far more important. The problem with UICC is that these devices have enormous potential – created by the copious amounts of CPU, ROM and RAM they enjoy – in comparison with SIM (subscriber identity module). Potential can be a double-edged sword.

SIM cards are a case in point, when it comes to security connectivity, because it is the immobility of UICC, in comparison to SIMs, that gives them the edge as a secure connectivity option.

If Gemalto’s strategy for On Demand Connectivity were to be emulated by later entrants to this market, there are three elements of its plan they should focus on. The company summarises these as Embed, Connect and Value.

Embedding the software provides the foundation for Gemalto’s management system to take over and run more complex operations on the device. Today that might mean that, for example, security cameras can be manipulated more skillfully, so that intruders can be automatically detected and followed. This is where integration is vital, as software within the camera – which allows the machine to detect motion, then switch itself on and focus on an individual – has to interact with intelligence built into the SIM. The net effect is that only the most alarming images (when an intruder is detected) are recorded and transmitted.

This is one example of how intelligence built into the machines and integrated by Gemalto ensures that they act more intelligently and don’t waste resources by committing absolutely everything to storage and the network.

In the future, M2M interaction will become a lot more complex.

Gemalto recently demonstrated its systems for automating emergency vehicles. Delegates at the recent ITS European Congress in Helsinki were shown how millions more drivers could be kept safe in the near future. Devices were shown to be able to detect if the vehicle they were embedded in had been in an incident, and were able to negotiate a number of different systems in order to automatically summon the police and ambulances.

“This is a great example of how M2M can find practical uses within the automotive industry, but it is far from the only one,” says Manfred Kube, head of M2M segment marketing at Gemalto. “One could argu that transport is the sector in which M2M technology stands to make the biggest difference in the years ahead.”

With car-sharing and peer-to-peer car hire schemes near to adoption, it’s vital that these location-based applications are secured.

There are many potential pitfalls that new vendors have to be aware of, says Lee Cottle, the vice president of global alliances at Push Technology. “The challenge is to maintain a quality connection and that is simply impossible. This is why more thought needs to go into the design of the application,” he says.

Any new system builders need to create bandwidth-efficient, network tolerant applications, he says. This involves minimising the data being sent or received prior to it even hitting the network. “Failure to do this causes a lot of unnecessary chatter and this uses up your data plan and clogs the network,” says Cottle.

One of the keys to understanding the advantages of embedded UICC is not to focus at first on the differences from SIMs, but to focus on the similarities, says Professor Jon Howes, technology director at Beecham Research. Both are based on the same certified hardware secure element, which creates the same levels of security.

TTe security features in the embedded UICC are extremely important to suppliers like Gemalto and G&D and are areas of strong expertise for them, as they can offer services like remote provisioning and related reprogramming while playing on those security strengths, he says.

Like any sort of security service, these features cannot offer absolute protection and there is always the possibility they can be circumvented. “But that is true of all security however implemented,” says Howes. Right-sizing the security offered in an M2M solution is always going to involve a trade off, but that it because there is so much you can do and so much time that can be spent on it. Where does one end?

“It depends on costs, profit margins, usability, the real threats, the quantified risks and much more,” he adds.