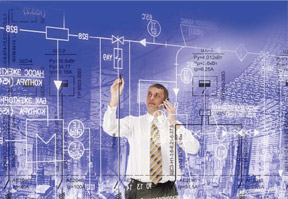 Industrial automation has been at the forefront of M2M deployment and seen many benefits emerge. However, that has left the sector grappling with legacy technology issues, writes Alun Lewis.

When it comes to implementing M2M visions, the manufacturing sector can probably claim a head start. After all, it’s around three hundred years ago that some clever French weavers came up with the idea of programmable looms, using the first generation of punched cards to produce complex textile patterns. As always however, pioneers in any field also end up having to deal with legacy technology issues later on – and that’s one of the key things now confronting many manufacturers around the world as they seek to integrate different systems, technologies, protocols and standards into a hopefully seamless operating model.

In this context, the many recent advances across a range of different wireless technologies provide manufacturers and the makers of factory plant with much needed flexibility in deploying connectivity across what can be a very difficult environment. On top of that, the range of legacy hardware and software that needs to be supported – combined with the need to often deliver mission-critical performance – is driving the increasing use of technologies like Java as well as products and platforms able to mediate between the different control systems and sensors already in use and the overarching management system itself.

According to Johan Svanberg, senior analyst at Berg Insight, “The combination of wirelessmtechnologies such as Wi-Fi, cellular, WirelessHART, ISA100 and Bluetooth can provide ubiquitous online connectivity at reasonable cost and deliver very high performance and availability. Industrial automation control networks are very time critical and connect through industrial grade standards and via near field wireless technologies such as Bluetooth and Zigbee.”

“There are a wide range of protocols for wired industrial communication including Modbus, HART, Profibus, ControlNet and Foundation Fieldbus. WirelessHART and ISA100 are the two most common industrial wireless standards at the control and field levels in wireless automation systems,” adds Svanberg. “In some applications and scenarios, control networks also connect via cellular and Wi-Fi. Berg Insight forecasts the number of cellular M2M connections in industrial automation applications to grow from 2.5 million connections at the end of 2013 to 7.1m connections by 2018.”

“The majority of M2M solutions are deployed on cellular networks,” he says, “but clients with existing radio networks increasingly ask how they can bring together disparate networks to enable data to be transmitted and collected across a number of areas. Cellular is great, but what happens if there is a network outage? M2M networks by their nature often monitor remote operations where a cellular signal may not be available. In these instances a either be deployed or integrated, if it is already in place, to support other comms activities.”

“Cost is also a factor and companies with a radio system can leapfrog many of the M2M pain points by sweating their existing asset,” he adds. “The ongoing operational costs of running M2M over a PMR (private mobile radio) system are generally lower with no data transmission costs. Most sensors and Remote Terminal Units (RTUs) are network agnostic, lending themselves perfectly to a UC approach.”

On the platform or systems side, a number of companies such as Eurotech, Axeda and Forcam have developed solutions that take advantage of open source and cloud technologies as a way to simplify the integration of diverse populations of devices, sensors and control systems.

Tim Taberner, vice president of marketing at Eurotech, highlights the importance of the MQTT lightweight connectivity protocol’s role in creating an environment where devices and sensors publish and consume data – in ways that are appropriate to their specific needs. “Factory automation in the past has usually been pretty point-solution and device-centric and the protocols used have been very prescriptive. Additionally, the types of data flowing around a manufacturing plant are going to have a wide range of different characteristics – security, the bandwidth required, delay tolerance and reliability. Taking an open source approach makes it much easier for companies to future proof themselves – and as MQTT can carry a wide range of payloads including text and images it can be tied into a wider web services-based strategy. It also complements a recent encouraging trend for companies in this space to start forming flexible partnerships with one another, rather than continually going head-to-head.”

For Exeda’s chief marketing officer, Bill Zujewski, its strategy of providing their machine cloud service platform to major industrial plant manufacturers such as GE Generators and scales and analytics specialist Mettler Toledo means that they can gather information from a wide variety of sources and systems and readily use this to improve both plant design and operational effectiveness.

“There are very few standards in IoT,” Zujewski observes. “Using Axeda’s platform, manufacturers are able to spot when equipment is about to fail, ensure uptime is maximised, reduce repair truck roll and deliver a fix-first-time maintenance regime. It also supports manufacturers wanting to move towards servitisation strategies, such as a customer buying power as a service – rather than purchasing a generator outright themselves.”

Forcam’s chief executive, Franz Gruber, sees the main challenge of the Internet of Things in manufacturing as “Building the cyber-physical systems (CPS) – the means of collecting tangible production data on machine output, then visualising and analysing that information in a virtual frame,” he says. “This results in vast masses of information – big data – that need real-time analysis, requiring in-memory data processing. One of the major design goals for Release 5 of Forcam can be expressed as 1-10-5-4 installation – that is, one central planning department, ten plants, in five countries, communicating in four languages. We‘re currently implementing such a system for a major auto component supplier that will eventually encompass 1200 machines in nine plants spread over the Americas, Europe and Asia”

Gruber adds, “Release 5 is programmed in Java. This meets the priority for usability and goes hand in hand with configurability. With a little experience in Java programming, Forcam clients can adjust the screens and masks, define the reports, and adapt the interfaces and functions of the software to fit the application precisely. Because it s
platform-independent Java is well suited to environments with a multitude of machine control interfaces. Clients with a global production infrastructure across the world need to have their production software adaptable to each IT environment and to each user. Java gives the ability to work across borders: in different time zones and in different languages with minimal effort in reprogramming the user interface.”