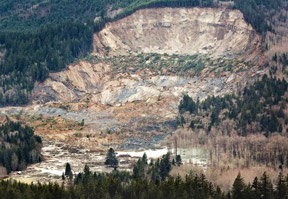 Like most people, I was completely floored by the devastating mudslides in Washington State earlier this year that tragically killed a few dozen people. All over the world, landslides/mudslides affect many people each year.

While we may not be able to prevent mudslides from happening, a number of companies are trying to provide better early warning systems that not only help homeowners/governments in the event of a mudslide by also for potential forest fires and floods. As many of you know, my family and I live in Calgary, which experienced some major issues with flooding in 2013.

For a while, scientists have been using data retrieval systems based on lasers that basically “take an x-ray of the landscape”.  While this has never prevented a mudslide, it does act as a pretty effective warning system to give people a higher chance of surviving such a disaster. Now, a Seattle-based company (Terrain Works) wants to make this information available to home owners. In addition to providing warning information about a potential mudslide, it would do the same for potential forest fires and floods.

Like any other kind of M2M solution, getting the data is only a small part of the overall effectiveness of the solution. All of the data in the world (such as potential hazards, changes to the stability of the land and environmental changes such as excessive dryness/moisture) will only be useful if this information is presented in a manner that allows for the right people to take action.  And, it appears that the government is taking notice, at least in some areas.  States such as Washington and Oregon have begun to implement solutions to provide better warning systems.  However, most states have little if no warning capabilities in place.

One would have hoped that the tragic events of this past year in Washington State would have convinced governments to move faster on such as warning system, considering that the issues of landslides affect pretty much every state in the US. M2M solutions are highly available today, using commercially proven technology. I would encourage anyone who may wish to learn more about what can be done to reach out to me so that we can do what is needed to prevent similar tragedies in the future.