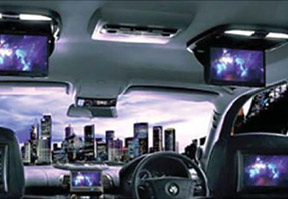 The speed and guaranteed quality of service of LTE as compared to previous generation cellular standards improves vehicle instrumentation systems dramatically; not only in the types and  sophistication of services available, but also the quality of the services.

For the automobile industry where profit margins on vehicles are low – typically much less than 10% of the retail price of the car. LTE provides a clear and compelling way for automakers to add new services and revenue models to their new LTEequipped models.

The law claims that the lines will converge at a point in the near future where the speed of cellular communications will be equivalent to short range communications, and for all practical purposes completely replace fixed-line connections (“the end of wireline”).

On the cellular side, we already have LTE at 150 Mbps (cat. 4). With “LTE-Advanced” being deployed over the next few years, we will see this speed going up to a peak of 500 Mbps uplink and 1 Gbps downlink.

By comparison, the bandwidth required to stream a single 1080p HD movie is “only” 10 – 20 Mbps. With support for multiple streaming HD video channels, currently the internet’s highest bandwidth user, virtually any service is available over the internet today via LTE!

Let’s now consider some real examples of the new applications that LTE will make possible over the next few years.

In addition, online music / video streaming, collision assistance and an integral 4G / Wi-Fi router supporting up to eight other passenger devices turns this car into a mobile internet hotspot!

The enhanced performance of 4G LTE networks enables HD movie streaming without buffering or waiting, as well as support for multiple simultaneous users (everyone gets to watch their own on-demand movie!).

Many cars, especially premium models, now offer TV screens for passenger use on long journeys, and also for driver use when the vehicle is stationary. It is easy to see how adoption of in-car TV might mirror the evolution of in-car audio – albeit more rapidly – from FM radio in the 1960s to the currently  popular on-demand music streaming services such as Pandora and Spotify.

Certain premium events such as the World Cup or Superbowl attract hundreds of millions of simultaneous viewers. To handle such high-demand live content, LTE’s Enhanced Multimedia Broadcast Multicast Services (E-MBMS) provides a low-latency, spectrum efficient way for the same content to be received by all users (broadcast) or a selected number of subscribers on the LTE network. It does this by implementing point-to-multipoint transmission (multicast) where a single live video stream is transmitted through the network core, multiplied and distributed to viewers or subscribers as required at the edge of the network.

Increasingly, status and safety information is being presented to the driver as an overlay on his forward view via the windscreen, similar to aircraft instrumentation. The ability to view information such as speed, navigation and vehicle proximity without having to look away contributes to a safer and more efficient driving experience.

LTE takes this development to a new level by leveraging the information content and power of the internet. For example, upcoming traffic hazards may be monitored by cameras and road-sensors in real-time, and then combined with data from surrounding vehicles. The ‘fused’ data is processed in the cloud and then relayed to all cars. Thanks to the low transmission latency of LTE, this is possible in real time with respect to the relative velocities of surrounding vehicles. Other aiding information may also be displayed such as proximity (and price) of fuel stations, services, parking or bridge toll options and real time updates overlaid on the road ahead as illustrated in Figure 6.

u-blox has developed a range of automotive grade cellular modules and satellite positioning components that provide plug-and-play compatibility and a range of options from 2G to 3G to 4G LTE multimode (which includes both 2G and 3G HSPA+). In addition, these modules are available in AEC-Q100 automotive qualified solder-down form for stringent requirements of the automotive industry.

The LTE multimode modules TOBY-L200 and TOBY-L210 are available to cover the radio spectrums deployed in America and Europe respectively, offering performance at LTE Release 9, Cat. 4 (150Mbps downlink / 50Mbps uplink). The devices support both circuit switched speech and Voice over LTE together with fall-back for both data and voice traffic to 2G / 3G. This enables support for all potential system architectures from fully integrated to functionally independent, as discussed above.