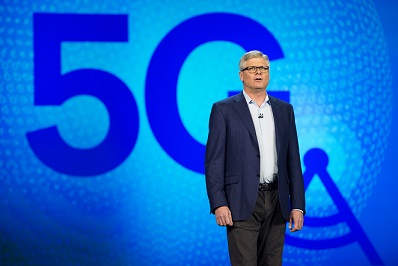 Qualcomm Inc today announced that it has reached agreement with the UK’s second largest chip designer, CSR plc on the terms of a recommended cash acquisition. As Jeremy Cowan reports, this follows last month’s sale of Neul to Huawei for US$25 million and other recent IoT investments where companies are looking for distressed assets or rising value before the Internet of Things reaches maturity.

The acquisition is said by Qualcomm to complement its current offerings by adding products, channels, and customers in the “important growth categories of Internet of Everything (IoE) and automotive infotainment.” (See also: Qualcomm and Sierra invest US$5m in Ireland’s Cubic Telecom to enhance embedded M2M connectivity)

CSR was known to be looking for a ‘white knight’ bidder as M2M Now reported on September 1, 2014, having rejected a takeover bid from a US rival (See: Chip designer CSR rejects takeover bid from US rival Microchip Technology as it mulls IoT options) CSR said at the time: “The price proposed by Microchip has been rejected and the Board is considering its options for the company. JP Morgan has been appointed to look at a number of bids for CSR.”

At UK£9.00 per share, the acquisition of the entire issued and to be issued ordinary share capital of CSR is valued at approximately UK£1.6 billion (US$2.5 billion). This cash offer has been unanimously recommended by the CSR board of directors. The deal is expected to close by the end of the summer of 2015. Qualcomm expects the acquisition to be accretive to Non-GAAP earnings per share in fiscal 2016, the first full year of combined operations.

“The addition of CSR’s technology leadership in Bluetooth, Bluetooth Smart and audio processing will strengthen Qualcomm’s position in providing critical solutions that drive the rapid growth of the Internet of Everything, including business areas such as portable audio, automotive and wearable devices,” said Steve Mollenkopf, CEO of Qualcomm Inc. “Combining CSR’s highly advanced offering of connectivity technologies with a strong track record of success in these areas will unlock new opportunities for growth.”

Huawei’s takeover of Neul was not anticipated, however, although Neul was known to be looking for a new home after more than a year of mixed fortunes, ranging from winning $5 million Series B funding, (See: Neul secures first Series B funding with additional US$5m as Boland drives company in new direction) to staff lay-offs and a change of business strategy (See our Exclusive Interview: Neul CEO switches focus from broadband to M2M, lays off staff, plans new office and investment).

There was no formal announcement of the deal and the price was not confirmed but a report in Business Weekly put the purchase price at $25 million, after which the Chinese company issued a statement saying only, “Huawei has recently acquired Neul, an advanced Internet of Things (IoT) research and development facility in the UK. Neul is a leading R&D and competence centre, based in Cambridge, UK, providing end-to-end solutions including chipset and platform, base-station and cloud management systems.”

Commenting on the acquisition, Tim Fowler, head of wireless at Cambridge Consultants told M2M Now: “Huawei has likely acquired Neul to offer its customers an optimised IoT solution that is more cost-effective than LTE-based technologies. Neul’s value is in its innovative focus on an original idea, specifically designed for low data rate IoT applications requiring support for very large numbers of devices. For years operators have been focused on the capacity crunch for mobile networks and LTE was designed as a very high data rate broadband delivery system rather than to support IoT.”

Fowler added: “The IoT challenge is to build a technology that is low enough cost to be put in billions of devices, ensure superior indoor coverage and maintain long battery life. Neul’s founders came from the Bluetooth domain and had the experience to know how to build low-cost, high-volume devices that avoid the patent licence fees that exist in similar LTE technologies.”

Novatel Wireless, Inc. (NASDAQ: NVTL) announced in September that it had completed a transaction with HC2 Holdings 2, Inc., a wholly owned subsidiary of HC2 Holdings, Inc., for a strategic investment in Novatel. HC2 will invest up to $23.7 million in the company. When and if both the preferred stock is fully converted and the warrants are fully exercised, HC2’s ownership stake is expected to increase to approximately 25%.

In August we reported that Switzerland’s u-blox, a provider of wireless and positioning semiconductors and modules for the automotive, industrial and consumer markets, was successful in acquiring Antcor, a developer of Wi-Fi baseband intellectual property (IP) for €5.2 million. (See: u-blox acquires Antcor for industrial Wi-Fi)