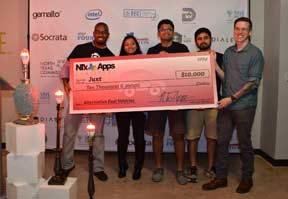 The inaugural NTx Apps Challenge has awarded US$80,000 to five teams of web entrepreneurs who created sustainability apps to address four key municipal growth challenges; water conservation, waste and recycling, smart energy, and transportation. The winners were announced during an award ceremony at The Treehouse in Addison, North Texas, USA.

The population in our cities is expected to double by 2050 and traditional infrastructure for energy, water, transportation, waste removal and recycling are no longer sufficient to keep pace with growth. The Internet of Things (IoT) and smart technology solutions hold the key to solving this challenge and collaborative hackathon and incubator programs such as the NTx App Challenge are creating inventions and innovation that work.

The NTx App Challenge brought together government, enterprise, non-profits and universities and inspired developers to create IoT applications to help solve the challenges facing fast-growing urban areas. Five winning IoT applications were awarded $80,000 in cash and prizes along with support to help bring their solutions to market.

The winners of the NTx Apps Challenge are:

Over the course of 10 weeks, contest participants received mentorship, office space and engineering support as well as free and discounted Gemalto M2M (machine-to-machine) technology, including the Cinterion Concept Board, an all-in-one Java-based IoT development kit, and the cloud-based SensorLogic platform to host applications.

“More than just a competition, NTx Apps is a unique public-private partnership that brings together the best minds in technology, entrepreneurship, and municipal government to solve some critical issues our region is facing,” said Robert Kent, NTx Apps Challenge co-founder and director of Public Policy for the North Texas Commission. “We hope to see more collaborative efforts like this in the future to create innovative solutions for North Texas’s toughest challenges.”

“The NTX community answered the call to tackle challenges facing our region. I’m pleased to see both the calibre of talent and the solutions conceived,” added Blake Burris, CEO of The Cleanweb Initiative, “It is my hope that winners create companies that become scalable companies ultimately impacting our region — environmentally and economically.”