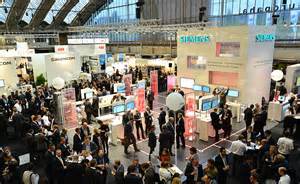 This year’s European Utility Week conference and exhibition kicked off on November 4, with almost 10,000 delegates from more than 250 utilities attending. Two key themes were present wherever you looked: the introduction of ‘Smart’ energy solutions for homes, businesses, cities and nations; and the need for the entire sector to transform the ways that it does business to adapt to ceaseless regulatory and technical change.

It’s become an increasingly diverse event in recent years, moving away from the wall-to-wall meters of earlier years, writes Alun Lewis, editor of M2M Now magazine. However, three clear – but inevitably inter-linked and overlapping – domains seem to be emerging.

At one end there are the traditional issues of large scale power generation, storage, and distribution and the roles of new technologies and engineering in bringing more flexibility and cost-efficiencies. Included in this are new applications, such as recharging electric vehicles. At the other, more consumer-facing end, could be found what might be considered ‘proper’ machine-to-machine (M2M) / Internet of Things (IoT) areas, such as smart homes, smart buildings and smart city platforms. Sitting somewhere in the middle were the topics of Smart Meters for water and energy and how these are best integrated with the rest of the infrastructure. Critical for this issue are all the customer management systems – the utilities’ equivalent of the telecoms world’s OSS/BSS platforms – and other ‘transformative’ challenges for the suppliers as they try to adapt processes and systems to a far more dynamic and uncertain future.

Some of us have been here before …

Indeed, one recurring theme from many discussions with utility industry experts at the event were the similarities with what the telecommunications industry has gone through over the last two decades or so. Telecoms users, once passive recipients of basic services through ‘dumb’ devices which were billed monthly using very simple criteria, have now become extremely demanding, using smartphones, connected TVs and broadband services with a bewildering variety of contract, billing, supplier and service options.

Similar changes are afoot in the utilities sector, especially where electricity suppliers are concerned, with smart meter options, intelligent thermostats and the move towards a more flexible and real-time delivery environment. The journey that the telecoms operators have had to make – especially where their back office systems and management cultures were concerned – has been extremely unsettling and painful at times.

In particular, Mike Ballard, senior director for EMEA Utilities Strategy at Oracle, spoke eloquently about the blurring of boundaries in the sector’s supply and retail chain, issues of customer retention and churn, the importance being able to impose appropriate QoS parameters in different sectors and the need to ‘productise’ the back office environment and move away from the traditional craft-based approach to service delivery.

Echoing this was the presence at the event of Junifer, a company founded by ex-telecoms industry experts to bring some agility and insight to all those CRM, billing and sales functions that are of increasing strategic importance to the longer-term future of the utilities.

For the present though, what ‘smartness’ there is seems to be very fragmented and sitting in particular proprietary silos from companies or specific sectors – and is similar in some ways to the very early days of the PC sector when there were multiple operating systems to choose from. Truly ‘smart’ solutions capable of linking devices in homes and cities must operate in plug-and-play ways, otherwise the costs of integration and ready adoption by consumers will slow mass take-up.

In this context, initiatives like the EEBus project who are working on an IP-based, internetworking platform for energy, white goods and appliances are extremely welcome. Formed two years ago with the aim of enabling applications to work across multiple devices and control interfaces, the organisation now has over fifty members with household names like Bosch and Miele involved as well as other major players from the telecoms and utilities worlds. In particular, they’re also coordinating work in this area with other industry and standards bodies such as the IEC, BacNet, LonMark International, the ZigBee Alliance and KNX.

That last organisation, Brussels-based KNX, also had a major presence at the show. Around twenty-five years old, KNX grew out of various national building automation initiatives and has developed a de facto bus-based system standard for building control that’s able to work over twisted pair, powerline, radio and Ethernet links. Its latest work involves expanding these concepts to integrating city-wide operations in more energy efficient and intelligent ways and incorporating things like electric car charging and local energy generation using photovoltaics, as well as more standard applications such as smart metering and energy sensor management. With over 7000 KNX-certified products already out in the market, the organisation role in also developing SDKs and APIs to integrate function control with smartphones will be a major driver in the creation of new use cases and business models.

Also at the show, but more specifically focused on the power management side, was the PRIME Alliance (Powerline Intelligent Metering Evolution), created in 2009 to define an open and future-proofed PLC-based infrastructure to support large scale smart metering and smart grid deployments by offering an alternative to wireless backhaul. There are already over five million PRIME-based smart meters in use in over 15 countries around the world.

Complementing this at the show on a more functional level was also the DLMS/COSEM User Association, which has developed a standard framework for smart meter signalling and control, using around 80 different data objects (OBIS codes) for electricity, gas, water and thermal energy. ‘Smart’ – in more ways than one

When it came to the SmartHome environment itself and bringing technology into the domestic world, there was an interesting and refreshing focus on usability and aesthetics – something that traditional energy meters have never been particularly famous for.

Google Nest – with its ex-Apple team background, as you might expect – was founded on the principle of ‘taking unloved products in your home and making them simple, beautiful and thoughtful’. With a growing range of devices and functions – all smartphone-controllable as you’d expect – Nest already offer thermostats that ‘learn’ a family’s behaviours and a smoke and CO alarm. The devices communicate with one another in the home and can communicate with the inhabitants in a number of elegant, effective yet unobtrusive ways.

Also with a focus on the aesthetic, Apple-using generation was ‘Anna’ from Dutch company Plugwise. Probably the first intelligent thermostat to be given a gender, Anna is part of a wider portfolio that extends to smart plugs, air conditioning controllers and motion detectors – all smartphone controllable – and that is currently being sold internationally through a number of retail outlets including energy companies.

A similar approach is being taken by Netatmo – this time using the design skills of Philippe Starck – with their thermostat, also smartphone controllable and with a range of application tools that can monitor and optimise energy consumption in the home. Other companies present with Zigbee-based smart home platforms were Spain’s Wattio and Germany’s Ubisys, while Belgium’s Fifthplay, a part of the Niko Group, extended their model further up into the grid and also into electric cars and solar panels for both domestic and city-wide services.

With efficient and reliable communications being an essential part of any smart energy strategy, its already becoming clear that one solution won’t fit all situations. While some countries are opting for metering to be done over cellular radio links, wireless coverage in some regions can still be problematical. To help resolve this, Swedish company Connode was demonstrating its IPv6-based mesh network solution to provide secure backhaul of meter data, using its 6LoWPAN technology specifically designed to operate with very low power consumption. Already being used by Telefonica O2 in the UK for its smart meter roll out, the company is also working with Landis & Gyr, while around 650,000 Connode-enabled smart meters have been deployed in Sweden, Finland, Norway and the Netherlands.

Also exhibiting in this connectivity area was ThingPark Wireless, this time using Semtech’s LoRa low-power wireless technology operating in the unlicensed ISM spectrum. With a broader and integrated M2M vision, the company was also promoting applications beyond smart energy and also covering Smart City possibilities such as smart parking, support for environmental sensors, traffic management, home healthcare and waste management, all managed by an OSS suite. European ICT integrators and consultants Imtech too had a large presence, focusing on the integration aspects of the smart environment and also highlighting their recent acquisition by major infrastructure services player VINCI.

Given the crucial – and largely unrecognised and unappreciated – role that the utilities play in keeping our civilisation ticking over smoothly, it’s going to be fascinating to watch how the European Utility Week event evolves over the next few years. If there’s one lesson t be learned from this event, it’s the sector’s increasing convergence with the telecoms industry – along with some salutary lessons from the wholesale disruption that telecoms itself has gone through recently via drastic technical and regulatory change.