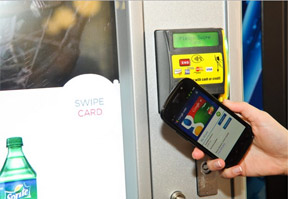 In February 2014 during the Mobile World Congress event, Visa and Mastercard announced that the both firms will support Host Card Emulation (HCE) initiative in order to help the take up of NFC services. PayPal entering the physical payment world with a wallet and Apple’s new iPhone 6 supporting NFC features with the Apple Pay wallet, HCE initiative caused strong disruption among payment industry players by answering what the mobile payment industry was expecting since a long time. In such circumstances the expected value chain: MNOs, TSM, banks and financial institutions was threatened by software vendors. Definitively, the mobile payment ecosystem became a fragmented market.

In 2013, the growth of NFC SIM cards was over 100 percent. Frost & Sullivan expects that unit shipments of NFC- and LTE-SIM cards will maintain high double-digit growth rates over the coming years. While this growth will have limited impact in the overall size of the SIM card market, it will represent an opportunity for smart card vendors to compensate the lack of growth of the low-end SIM card segment.

The ability to capture new users is crucial for service providers. But most of existing services highlights are based on its value added services and convenience, cost or confidence. Confidence of payment services is main issue for the consumer. Even if it is transparent for the consumer, security is fundamental for the system. Perceived confidence will be directly inherited from strong security mechanism and a substantially low level of fraud and risk. At the moment, service providers are not seeing security as the major driver for a massive success. Such attitude may be a risky gamble, but the payment industry already took this option many times.

“Frictionless and convenience are the most attractive features that mobile payment solution should have as a basis. Security should be transparent for final users,” – says Frost & Sullivan ICT Global Programme director Jean-Noël Georges.

Cloud-based payment solution is a threat for other payment solutions but cloud-based approach could also impact mobile banking as well. Again, service providers, in this case banks, will not be reluctant to switch to cloud solution as long as the service provides flexibility and value added services will provide a competitive advantage. In addition, if banks have already invested in a cloud-based solution for payment it will narrow the gap for them to move to mobile banking by using cloud as well.

2014 year was an exciting year for the payment industry and more specifically for new initiatives and announcements. Banks and financial institutions are now looking to solutions that will allow a huge client adoption. This is probably possible by leveraging a hybrid approach by using cloud-based, tokenisation and secured elements.

The topic will be presented by Frost & Sullivan ICT Global Programme director Jean-Noël Georges during Central European Electronic Card 2014 conference taking place in Warsaw, Poland on 26-27 November 2014. CEEC event is becoming a year’s most important meeting venue for persons and companies representing of the widely understood industry of modern card technologies and systems in Poland, and in Central Europe as well.