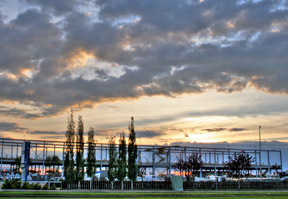 Why is Industry 4.0 made in Germany?  Well, this is the country that supplies the world with a lot of factory equipment and the term “Industrie 4.0” is being widely employed by German industry leaders, researchers, industry associations and unions. I like it because it’s a neat way of describing how IoT enabled systems will improve engineering, production and logistic processes. Also, because it doesn’t include “things”:

GE’s terminology is very similar: they call it the Industrial Internet and talk out how machine intelligence is evolving to meet the needs of 21st century industrial companies. GE is an industrial giant that makes aviation engines and turbines for power plants as well as a wide range of household appliances. The company is into big data analytics in a big way and their portfolio also includes around 40 software and services offers.

This is serious stuff, unlike the B2C hype and nonsense that obscures the importance of M2M and the IoT to the business community. Example:  43% of Manufacturing Professionals “don’t understand” or “know about” the IoT according to LNS Research. Not knowing about the IoT would seem to indicate that they should get out more, read more, and do some serious thinking if they want to continue with a career in manufacturing.

We’re in a sweet spot

I don’t have any guru types pretentions, but if you consider the slew of technology innovation that has taken place in recent years then it is clear that a revolution is underway. Serious IoT vendors have recognised the need to decouple data acquisition from data usage by employing a virtual architecture, i.e. employ virtual circuit links that appear to function as physical links between data sources and destinations. This is the way the Internet works: data reaches its destination using virtual connections that employ different physical routes. In addition they are employing enterprise ICT technology, e.g. middleware and a service bus, to facilitate flexible integration with any relevant application that needs to interact with any M2M data source.

The sweet spot comes from the convergence and intersection of recent developments in five key areas: (1) sensors and gateways; (2) intelligent devices; (3) wireless networks; (4) virtualization and (5) big data. Leveraging the technologies in those areas – together with the right architecture – releases the full potential of M2M. It results in a new form of intelligence having powerful, new capabilities that optimize process productivity and the efficiency of corporate decision-making. Equally, and possibly more important, is the ability to future-proof solutions that employ this powerful combination.

Add it up and it becomes clear that this new, enhanced IoT environment will take into an new era, one that will give us some amazing, innovative applications and services.

One: an IoT solution that does not allow data to be shared between apps, enable interaction, interoperability and resource sharing is simply an M2M solution that has been rebranded. And two: enterprises employ a service-oriented architecture that’s based on software components that provide application functionality as services to other applications. Being in software means that the architecture is very flexible. This is the model that should be replicated. Do that and you can create Industry 4.0 solutions.