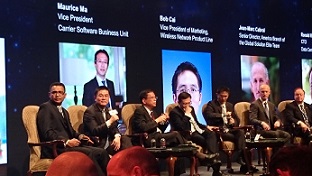 With many mobile operators unready to commit to fifth generation mobile networks (5G) while they still have yet to see a return on their 4G investments, Huawei has put a lot of work into developing a ‘4.5G Business Blueprint’, and showcasing 4.5G industry applications for mobile operators “in the near future” by which they mean 2016.

The briefing expanded on an initial 4.5G announcement in October 2014, in which the company highlighted the need for a further evolution of the LTE standard prior to 5G becoming a commercial reality. As an industry partner Huawei aims to help telecom network operators expand their business, improve their user experience and promote new industries through 4.5G. The Shenzhen-based vendor declared it is changing from a network-centric company to a customer-centric one, the sub-text of which is that Huawei wants to be viewed as a software provider more than a hardware company.

During the London briefing, Bob Cai, vice-president of Marketing, Huawei Wireless Network Product Line, detailed the opportunities enabled by 4.5G through several demos. He highlighted the ways that 4.5G can improve the network. “4.5G is a natural evolution of LTE, and supports new business opportunities and an improved user experience through enhancement of the mobile network’s capacity and capability,” he said. “This in turn will transition our industry into an all online world with ultra-high speed massive connections and low latency, allowing all of us to be fully prepared for the large-scale arrival of applications for cellular IoT.” According to Cai, Huawei expects 4.5G to be deployed soon commercially: “In the next five years, 4.5G will accelerate incredible industry-wide developments, create new and exciting business opportunities, and provide the ultimate user experience.”

He singled out two applications that Huawei is working on, smart meters and the LTE SmartBand (they acquired Neul last year).(See: CSR’s $2.5bn sale to Qualcomm follows Huawei’s grab for Neul, adds to list of IoT value investments.)

“We’re working (in smart meters) with major operators and energy providers,” Cai added, although as yet no names are being given. Following its acquisition of Neul there is now chipset support for LTE-M and the company demonstrated an LTE-M based module that is integrated in smart meters and m-health wristband monitors.

In the next five years the company believes the user experience enabled by mobile will become much more immersive. For example, virtual reality and new applications such as smart metering, and drone technology will begin to enter into people’s regular work and life environments. 4.5G represents the necessary enhancement to the mobile network in terms of capacity, connection number and latency, to make these intelligent applications possible.

Huawei believes 4.5G will help stimulate the increasing popularity of many technologies such as mobile virtual reality glasses, smart metering and drones:

One of the core messages of the day was ‘ROADS’, which stands for Real-time, On-demand, All online, DIY, and Social. As an acronym it may be a bit contrived but it encapsulates what Huawei wants us all to take away once we’ve met them next week in Barcelona. Drill down a bit and the company is launching the FusionCloud Omni Solution, an ‘Open Road to Cloud’. This is designed to be Open, cascading through OpenStack; Secure, with a consistent security policy across private and public clouds; and Agile, enabling end-to-end SLAs (service level agreements) and free application migration.

It’s not news to say that traditional telco revenues in voice and SMS are falling, from 70% of $2.0 trillion earned by telcos in 2012 to 35% of $2.45 trillion forecast earnings in 2016 (Source: Huawei). Nor is it a revelation that there’s a new opportunity in Cloud services. But Ron Raffensperger, CTO of Huawei’s Data Centre Solutions showed the audience that Cloud is evolving through three stages. The first challenge is migrating to Stage 1, server virtualisation. Stage 2 is managing the public and private cloud, and stage 3 is achieving the hybrid cloud.

Asked by Mark Mortensen of Analysys Mason if operators are changing their minds about enablement services and being left behind as transportation providers, Raffensperger said: “Many operators are beginning to make the transformation. The whole concept of DevOps (cooperation between software developers and other IT professionals) is very new to them. Some operators like Vodafone and other majors now have real offerings.

“‘I want to be Amazon’ is NOT a good strategy,” he added, “but they want to give customers integrated services with,” and here he emphasised the point, “new revenue sources built on top of existing networks.”

Patrick Zhang, president of Huawei’s Marketing & Solutions told the audience, “Traditionally, Huawei has been a hardware vendor, but we have 75,000 engineers, and 80% of them are software engineers. We’ll keep selling hardware. Today we’re talking about HTR.” More of which in a minute.

Behind this, Huawei has set up its own NFV Open Lab, in Xian, China. The lab is said to be “highly scalable, and distributed”. (For more information, see: NFV Open Lab.)

The importance of video

Operators are actively embracing UHD Video (2K/4K/VR), said Cabrol. In a survey of the top 50 mobile operators, 75% said they consider video to be a key development direction. And 85% of these operators consider MBB 2K or FBB 4K video as a key way to provide differentiated experiences.

“Video is sensitive to packet loss or delay, leading to slow video starts, image defects, and lag. Large bandwidth is necessary,” said Cabrol, “but it is not sufficient for a good video experience. Throughput does not equal bandwidth. The HTR is designed to minimise the effects of packet loss and improve the quality of experience. It offers three times the throughput of current networks, delivering sub 0.5 second start for video (current starts average 5 seconds).