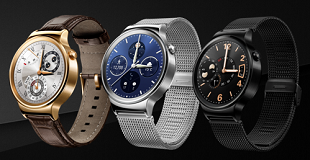 Mobile World Congress, Barcelona, Spain. March 2, 2015 — Delegates at #MWC15 are being saturated with messages about wearable tech, not least smart watches. This year however, says Jeremy Cowan, there’s a genuine effort to address the challenges they face, such as poor design, limited functionality, battery life, and high cost.

One tech vendor has introduced a smart watch platform for Android Wear devices that it says could reduce power consumption by up to 40% compared to the previous generation. Broadcom Corporation (NASDAQ: BRCM), a global provider of semiconductor solutions for wired and wireless communications, is using Mobile World Congress to introduce a new smartwatch platform that reduces power consumption for Android Wear devices. The platform offers original equipment manufacturers (OEMs) more features including GPS with sensor hub processing and wireless charging support.

As well as reducing power usage by a claimed maximum of 40% over the previous generation, driving further improvement on the core challenge of battery drain in wearables, the platform improves function and performance by offering a smaller form factor, enabling OEMs to add more features or include a larger battery inside their wearable for longer charge life.

In addition to an advanced application processor (AP) and Broadcom’s combined WiFi and Bluetooth chip in the new platform, OEMs can choose to integrate GPS with sensor hub processing, near field communication (NFC), wireless charging support and camera support based on their product needs1. With smart watches expected to account for more than half of wearable shipments in 20152, there is a significant opportunity for companies to integrate a variety of features and quickly bring products to market.

“Smartwatches represent a big piece of the wearable pie, and Broadcom’s new platform expands opportunities for Android Wear developers designing both high-end and affordable devices,” says Larry Olivas, the company’s senior director, Business Development, Wireless Connectivity Combos. “As a company that is in a majority of the top smartwatches for 2015, we have the expertise and longstanding connectivity leadership to power the next wave of wearables.”

Broadcom says the platform offers a smaller form factor, which improves performance. This enables original equipment manufacturers (OEMs) to add more features or include a larger battery inside their wearable device, allowing for even longer time between charges. In addition, the new platform offers OEMs the chance to integrate features such as near field communication, wireless charging support and camera support.

451 Research associate analyst, Ryan Martin comments: “Compromise has become the name of the game for early wearable tech entrants. But when talking about what trade-offs to make – whether in processing power, connectivity, storage, etc. – it’s important to understand that a much lower baseline has been set for wearables, relative to expectations in the smartphone market. Central to this is anything and everything that has to do with battery life.”

“For this reason, Broadcom’s new smartwatch platform could have sweeping implications for the industry as a whole – assuming the 40% reduction figure holds true regardless of device type (the OS-level will have more relevance in the long run). The most impactful element to all of this, however, is in giving Broadcom customers the freedom to choose which components to incorporate into their devices. And it’s an effective step toward enabling an unconstrained design methodology,” says Martin. Usability is being tackled at Mobile World Congress by Munich-based Giesecke & Devrient (G&D) which is demonstrating what is says is a secure way to download a new subscription into a new device using a smartphone. The smartphone is used to both request and download a subscription into an IoT device or a smart watch they have just purchased.

By pairing the new device with their smartphone, via Bluetooth for example, the new device’s embedded SIM can be loaded with a subscription without the need to visit the mobile network operator’s retail store (MNO) to sign a contract and collect the SIM card. This shows the progress of an industry initiative coordinated by the GSMA to develop an industry standard for remote SIM provisioning for consumer devices.

A leading provider of subscription management systems, G&D continues to develop applications using its AirOn™ technology which is designed to help operators increase revenue by getting more return from their network investments. In future, more and more IoT and consumer devices such as wearables, tablets, eBook readers or in-car entertainment systems will be equipped with an embedded SIM. Those SIMs may not hold any operator profile and may be ’empty’ when first used by the consumer. Typically, consumers want to connect those devices to a network but without signing up for a new data plan or visiting the operator’s retail store. With G&D’s solution, mobile network connections can be obtained simply.

Meanwhile, Huawei stopped teasing the market and has given the world a clear look at its new range of smart watches. It remains to be seen if ‘Timeless Design’ is an asset in a watch; either way, the Chinese maker describes the device as the “World’s First Smartwatch with a Timeless Design that is Smart Within”.

Designed by a team of traditional watch designers with experience of creating fashion watches, the body boasts  craftsmanship featuring sapphire crystal elements, and a metal body which features a 316L corrosive-resistant, cold-forged stainless steel, usually only seen in luxury watches.

The watch has a display at 400 x 400 pixels resolution in 286 ppi at a 10,000:1 high contrast ratio. The touch-sensitive sapphire crystal lens cover can even work with gloved or wet hands, for a more convenient experience than some rivals.

Designed with personalisation in mind, Huawei Watch offers 40 customisable watch faces ranging from a classic analogue to digital, or even a tracking design that displays health data including calories ingested, steps taken and more. Huawei Watch comes in gold, silver and black with a full range of materials, watch straps and other styles also available.

The keys to success

Ian Fogg, head of Mobile Analysis, IHS Technology says: “The watch’s use of Android Wear enables Huawei to leverage Google‘s Wear app ecosystem and wide range of wearable apps. Without such apps, a smart watch is little different from existing watches. But, the choice of Android Wear has downsides too. Huawei must rely on hardware design and features to differentiate from other company’s smart watches.”

Fogg adds: “Huawei’s choice to use a fully circular screen – unlike the flat tyre displays of other circular smart watches – is especially important given the limitations Android Wear imposes on user interface customisation. Huawei is aiming for a premium design complete with a highly scratch-resistant sapphire screen. This market is still new and emerging, but Huawei clearly has bigger aspirations than hardware alone – it also is developing its own health ecosystem. This is a long-term strategy and will have little immediate impact on the fortunes of Huawei Watch.”

Instead, this product’s success depends on many factors: Huawei’s ability to execute a reliable mass market smart watch at a good price, but also key factors outside Huawei’s control: the fortunes of Google‘s Android Wear platform and the reception to Apple Watch. Fogg concludes, “If Apple Watch were to stumble, it could set back the whole market. If it’s a blinding success, then Huawei may be too far behind by the time the Huawei Watch eventually goes on sale in mid-2015.”