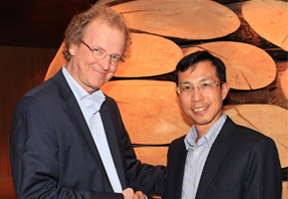 NEXT Biometrics Group ASA, lowest-cost provider of fingerprint sensors, has announced that Campbell Kan, former president of PC Global Operations of ACER Inc. manufacturers of PC’s, has joined NEXT as vice president operations and Asia Sales.

Tore Etholm-Idsoe, CEO of NEXT, headquartered in Oslo, Norway, said, “From 1991 to 2013, Mr. Campbell Kan worked his way from a software engineer to become head of global operations for ACER, manufacturers of PC’s. In this position (2011-2013) he managed ACER’s Products, logistics, procurement and quality assurance functions worldwide. He will now plan, build and manage growth of the same functions within NEXT Biometrics Group.”

Etholm-Idsoe said, “Additionally, Campbell will assume responsibility of NEXT sales in Asia. Throughout his career he built a strong and trusted name among Asian TIER-1 companies in the notebook, tablet and smartphone space. In addition to management of the NEXT Asian sales force, he will personally handle the major and strategically important TIER-1 accounts.”

The NEXT CEO added, “Throughout his career Campbell has held key engineering and operations positions within ACER’s divisions handling PC’s, tablets, smartphones and internet of things. His detailed understanding and established network within these markets will further strengthen the NEXT organisation.”

In his new position as vice president operations and Asia Sales, Mr. Kan will be based in Taipei, Taiwan.

In making the announcement of Campbell Kan’s appointment to the NEXT management team, Etholm Idsøe said, “As NEXT targets to serve multiple high-volume, demanding Tier-1 accounts, we have for some months been seeking to strengthen the operations part of our organisation. Our strategy has been to seek such resources outside the fingerprint industry, from more mature high-volume segments in the IT-industry. Campbell’s long and successful track-record within the highly competitive PC-industry makes him ideally suited to run NEXT’s operations, and make sure that we deliver high quality, at the right time and cost.”

He added, “We strongly believe Campbell’s understanding of the notebook, tablet and smartphone space, in combination with his reputation within these industries, will perfectly match the NEXT high quality solutions.”

“It is with great joy we welcome Campbell as a part of the NEXT top management,” said Etholm-Idsoe.

Campbell Kan said, “Having studied the NEXT technology and their management approach to the market, I am thrilled about the huge business opportunities and am honored to join this company. Here I can enjoy being a part of a fast moving team, with a unique technology in a fast growing market. Along with the NEXT CEO I truly believe I can make significant contributions capitalising on my broad experience in operations and product management within major NEXT segments like notebooks, tablets and smartphones.”