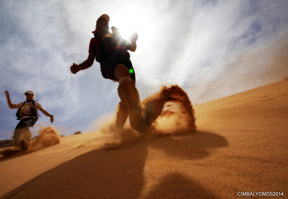 Each of the 1,330 extreme athletes ran with a SPOT Gen3 on their backpack, allowing MDS race organisers, emergency support teams, sponsors, family and friends to precisely track each runner’s location through a web site hosted by a Globalstar partner and geolocation solutions. Developed in just days, the bespoke service allowed users to search for individuals and teams.

With sand in their eyes and no other competitors in line of sight, athletes did occasionally miss the markers and stray off course. Using SPOT devices and MDS, the support crew was able to immediately act on geo-fencing alerts and dispatch a rescue team.

There were a total of 18 rescues during the event. Day five of the event was the busiest day for emergency assistance, with six rescues occurring over a section covering 91km. Each incident involving a ground crew was completed in just minutes and two MDS helicopters were nearby in case their assistance was required. The rescue crew directed able athletes back to the course since any competitor who is rescued is automatically disqualified. Patrick Bauer, CEO of the MARATHON DES SABLES, commented, “The use of SPOT Gen3 has made the operations side of this year’s race even more slick, plus it reduced risk for the athletes. In previous years, we relied on the competitor’s RFID tags passing over each checkpoint. If someone didn’t arrive at a checkpoint 15-30 minutes after we expected them, then we would send a rescue party. Real-time tracking with SPOT and MDS has enhanced the efficiency of our operations dramatically.”

Thierry Dedouche, geolocation manager at MARATHON DES SABLES said, “Time and time again, we proved the value of SPOT in the MARATHON DES SABLES. We gained valuable insight into the use of devices and the MDS platform and are planning enhancements to the MDS geolocation service to support future MDS and sporting events. Over time we hope to extend the value of the tracking service and allow athletes to analyse their performance during an event.”

Now in its 30th edition, MDS is a gruelling multi-stage adventure through a highly challenging landscape in one of the most inhospitable climates – the Sahara desert. Held April 3-13, MDS 2015 saw the world’s toughest runners, including Ranulph Fiennes take on the challenge of a lifetime, facing the most extreme terrain as they raced across the sands of Morocco in temperatures as high as 50 degrees Celcius (100 degrees Fahrenheit).