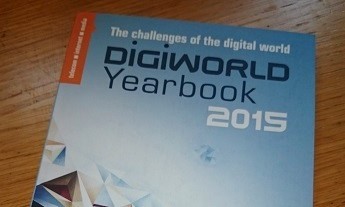 Over the past 15 years, IDATE’s DigiWorld Yearbook has become a regular information source, analysing developments that have shaped telecoms, internet and the media, identifying global trends and giving guidance on what lies ahead.

With the launch of the 2015 edition the purpose and scope of the Yearbook continue to expand, reports Jeremy Cowan, as digital technologies have become an increasingly important component in the transformation of business sectors such as connected cars, financial services, insurance, healthcare, and retail sales. Speaking at the start of this year’s launch programme which began in London at BT‘s headquarters, IDATE chairman, François Barrault said, “We have entered into a new stage in the digital transformation over the past few months. Today, new intermediaries are coming to shake up the status quo, many of them from outside the industry, taking advantage of new technologies and new consumer cultural behaviour to revolutionise the value chain.

“Everybody knows how Uber has disrupted the taxi business, and Airbnb the hotel market. But finance, insurance, health and automotive industry leaders have all had to sit up to the risk of digital innovations shaking up their ecosystem, and forcing them to depend on external, unavoidable platforms.”

This echoes the central theme of the upcoming DigiWorld Summit (November 17 – 19, 2015), as IDATE’s annual conference will be held this year under the banner of: “Digital First”.

“For we here at IDATE,” said CEO, Yves Gassot, “whose business it is to wade through the latest market developments on a daily basis, the process of looking back over the year’s events only confirmed the significance of certain game changers such as mobility, the cloud, the Internet of Things (IoT), big data and social media. Some would also add 3D printing and artificial intelligence to the list.” Scorecard for the digital economy in 2015:
Back on a growth path, but Europe still lags behind

After the recovery announced in 2013, DigiWorld markets confirmed a stronger rate of growth in 2014, generating €3.7 trillion. With all segments combined, growth increased to 4.4%, which is 0.5 point more than the year before.

These growth rates are still below those being reported for the economy as a whole: Global GDP rose by 5.9% in current value in 2014, compared to 5.3% in 2013. This global recovery will become stronger still in 2015, says IDATE, with DigiWorld markets generating €3.9 trillion, and climbing to €4.4 trillion in 2018. Snapshots of 10 key trends and three outlook scenarios for internet, telecoms and TV markets in 2025

For the first time, this year’s edition of the Yearbook includes outlook scenarios for internet, telecom and TV markets and players, provided by IDATE’s teams: 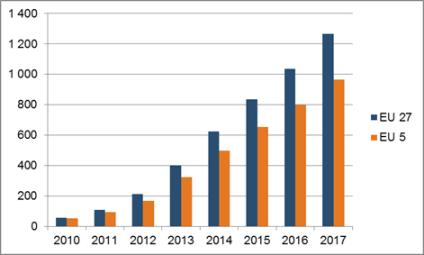