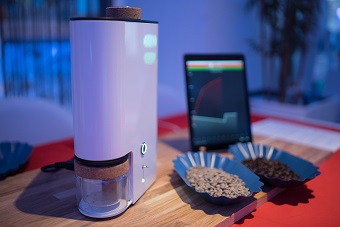 London, UK. June 4, 2015 — Bluetooth® Special Interest Group (SIG) hosted a showcase event in London last week called ‘The Future is Smart’, demonstrating some of the best Bluetooth innovation coming out of the UK and Europe.

Among the companies and products on show in London were:

SAM Labs – The ‘ultimate internet-connected electronics kit’: A Raspberry Pi for the IoT, SAM is said to be the first modular electronics development kit that seamlessly integrates hardware, software and the internet. It’s billed as the easiest way to learn about engineering, electronics, the IoT, and coding by doing. All the modules of course communicate using Bluetooth Smart.

SAM Labs is a London-based start-up company that develops toolkits for the Internet of Things (IoT). SAMs solution consists of wireless sensor and actor building blocks that connect via Bluetooth to the SAM software. The SAM software is an intuitive flow-based ‘drag and drop’ interface, enabling users to create, build and connect physical objects to the internet in minutes, not hours, with no coding experience necessary. With SAM you build connected devices and wearables such as internet-connected skirts, responsive shoes that spray paint and lighting projects. SAM Labs simplifies electronics beyond traditional engineering and puts it into the hands of creatives, students and designers who want to develop human-centred solutions.

MiPow – MiPow demonstrated the Playbulb: A Bluetooth mesh-enabled lightbulb that also acts as a wireless speaker. MiPow also exhibited their PlayBulb Color, plus the new Garden Light, which includes the new Mesh Bluetooth technology that MiPow will be adding to its range later this year. This will allow the pairing of more than five lights to one handset using Bluetooth.

At CES in January it had over 300 Rainbow bulbs paired to one iPhone. MiPow also demonstrated Power Tube 3000, a Power Bank with Bluetooth, so it can communicate with its Juice Sync App – giving distance, temperature and remaining charger information.

Kokoon – ‘Sleep Sanctuary’ EEH headphones: No ordinary Bluetooth headphones, Kokoon is claimed to be the first pair of headphones comfortable enough to be slept in and smart enough to know how and when to adjust your music as you fall asleep and wake.

Kokoon’s EEG sensors and app give clinical levels of insight and the intelligence to help you improve your sleep. Designed for use in bed at home, on a plane or train or even in a campsite, Kokoon looks after your sleep, optimising your ambience and ensuring you have the peace you need to rest.

Ikawa – Bluetooth coffee roaster: Now IKAWA is revolutionising the way we roast and drink coffee with the world’s first digital micro-roaster. The IKAWA Home Roaster enables you to roast your coffee at the push of a button.

Blocks – The modular smartwatch: Returning to ‘The Future is Smart’, Blocks showed off the build components of its latest prototype – Project Ara for the smartwatch market. Its most recent prototype, which is one step away from manufacture, consists of a main core processor, as well as several peripheral modules, that can be linked together using its new connector design.

Blocks is the world’s first fully customisable smartwatch, similar to Google’s modular smartphone Ara. Users can choose any individual modules, such as extra battery, contactless payment, GPS, and heart rate monitor modules, and connect them to a screen module, creating a smartwatch unique to them. By spreading electronics around the wrist, Blocks will allow users to build a device that has easily swappable features as well as extendible battery life. As new technology is released, users will not need to buy a whole new smartwatch but could upgrade its features by simply replacing individual modules.

Kontakt – The Tough Beacon: The Tough Beacon is encased in a special polycarbonate blend that makes it, well, tougher than the average beacon. Virtually shatter-proof, completely waterproof, dustproof, hermetically sealed, anti-static, UV-resistant, and operable through a wide range of temperatures, the Tough Beacon is ready for all outdoor and extreme environment proximity needs.

The speaker, designed and hand-built in Britain, features the latest aptX Bluetooth technology, delivering incredible volume and clarity – the loudest portable speaker on the market for its size (a highly mobile 435g). It offers a wide range of advanced connectivity options, with in-depth control via its own Android app (iOS available soon).

TobyRich –  SmartPlane 2.0: Bringing the Internet of Things to toys, this Bluetooth Smart remote control plane is the first gaming drone in the world. TobyRich demoed its SmartPlane, as well as previewing the Kickstarter for tobyrich.vegas – a gaming drone. This is a light gadget that can be controlled simply by touch, using the mobile app. This can reportedly be used for imaginative gameplay mechanics such as dogfights and stunts.

Demos included a wrist-worn BLE golf product, beacons, lighting demos as well as demos for transportation, EV charging and an app for real-time bus timetables which is beneficial to the visually impaired and can save councils money.