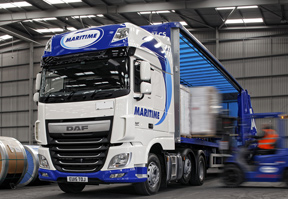 Maritime Transport Ltd (Maritime), has increased its investment in telematics with its long-term provider Microlise to include a fully integrated transport management system and intelligent in-cab communications.

Following an initial introduction of telematics to its 700 strong fleet in 2012, Maritime has progressively increased its fleet size to 1,000 HGVs and with this growth, have taken its investment in telematics further.

The investment includes improved in-cab communications to allow Maritime’s transport operators to interact with their drivers. Maritime is also extending the integration of its transport management system with the Microlise Transport Management Centre to maximise the benefits of real-time fleet visibility to the business. Microlise has become a strategic platform within Maritime, providing the business the benefits of tracking, telematics, journey management, and in-cab technologies.

It was the successful adoption of telematics by Maritime in its initial phase of investment which provided the incentive to deploy the technology further into the business.

James Andrews, general manager at Maritime, explained: “We take the performance of our drivers extremely seriously and using the data gathered through the telematics system which, was installed in 2012, we have been able to significantly cut our fuel costs. This has been achieved through the near elimination of idling, focused driver training, visibility of unnecessary mileage, all underpinned by being able to introduce a driver incentive scheme that works fairly for the drivers across our multiple depots and vehicle types to help maintain our new levels of efficiency.”

Many large scale commercial vehicle operators are now taking on second or third generation telematics solutions, with integration with existing systems a key challenge. Maritime has capitalised on Microlise’s ability to work closely with customers to deliver specific requirements, by outlining exact requirements from the outset of the relationship. Three years on from the initial installation, Maritime has realised its original intentions for the system but are now taking this even further.

Nadeem Raza, chief executive officer at Microlise, added: “Maritime runs a mixed container and curtain-sided fleet, with vehicles spending much of their time at ports. The company has very specific objectives to meet, different to many other haulage companies operating in the UK. Microlise provided a tailored solution to Maritime in 2012. Since then, the company has utilised it in the most effective way, fully integrating the solution into its business practices. Maritime has reaped the rewards and has now chosen to invest further, increasing its competitive edge in the market.”