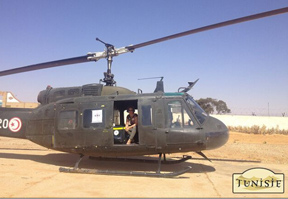 The Rally of Tunisia is a famous rally which originated in 1982. For decades, motorcycle, quads as well as cars – typically 400 vehicles on average – have taken to the sands every spring and sped across some of the world’s most extreme desertscapes.

However, the annual rally came to an abrupt halt in 2012 following a number of security-related incidents: Continuing to hold the race was deemed too much of a risk.

The Tunisian government made its message clear – the race could only be resumed once the security risk had sufficiently diminished, or appropriately mitigated.

When it was mooted that the race might be resurrected in 2015, government departments leapt into action to do everything possible to increase the likelihood that the race would get the green light. The Tunisian Ministry of Sport and the Ministry of Tourism both faced intense pressure to deploy new measures to ensure the safety of all participants as well as officials and visitors to the race. It was widely assumed that if the race was not given the go-ahead in 2015, then it would probably be the last attempt ever. So the stakes were high.

It was of vital importance that race officials at the event organiser, France-based NPO Events had the ability to track each vehicle’s location as well as enabling drivers and riders to communicate with officials and with rescue services in the event of an emergency, whatever its nature, mechanical or physical.

Tunisian satellite solutions specialist, VMD, a Globalstar VAR operating in Africa, was entrusted with the task of implementing a solution that would assure the safety of the participants, and enable communications even when participants were deep in the desert.

VMD set up a partnership with NOP to develop a customised tracking system. With the requirement that the devices needed to be small, waterproof, easy to use and reliable, the solution was based on the SmartOne M2M-based satellite tracker from Globalstar.

Jamel Hajji, Sales & Marketing manager at VMD explains: “We fitted a SmartOne tracker unit to each car, quad and motorbike, and attached it to the battery power supply.

“We designed the device to have two alert buttons; the driver or rider would press orange for a mechanical emergency such as a breakdown, and red for a medical emergency,” he continued.

It was important that the entire system enabled reliable ‘itinerary recognition’, so that race officials and rescuers would know where each vehicle was at every point, in relative positioning with each other, as well as being able to rapidly know their positon amid thousands of square kilometers of unmarked, dune filled sand. Alongside its technology partners, VMD developed a software map interface to fulfil these requirements.

After several tests of the system in Morocco and southern Tunisia by VMD, the Tunisian government was satisfied that the M2M based system would deliver on the safety and security requirements. The 2015 Rally of Tunisia was given the go-ahead to take place 25-30th May.

The security solution included a rescue helicopter manned with a crew who could pinpoint the location of the distressed racer rapidly and precisely.

The helicopter was certainly kept busy during the race. Land-based rescue vehicles and ambulances could not reach deep into the dunes, and the helicopter intervened in multiple SOS rescues.

One of the main benefits of the system was that the helicopter crew could pinpoint the location of all competitors from a single screen view.

Day two of the rally was a particularly gruelling stage, and eight cars suffered irrecoverable mechanical failure. Two drivers even spent two nights in the desert.

The airborne team was also called to rescue a driver who while broken down in the desert suffered a diabetic attack. In another dramatic rescue, a driver crashed resulting in a cerebral fracture.

Everyone involved is now very hopeful that the success of the 2015 race, and the demonstrable life-saving capability of communications and safety enabled by satellite M2M-based SmartOne will help re-establish the Rally of Tunisia in the annual rallying calendar.