Home › Blogs › Tube strikes are the best advert for M2M ever 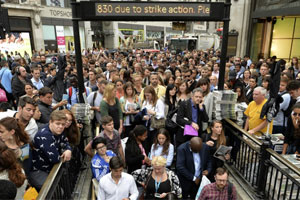 Well, they could be

People often say to me, “Oi mate, didn’t you see that red light?” Honestly, if I’ve heard that line once, I’ve heard it a thousand times.

Actually, their rants aren’t always audible over their thundering engines. Sometimes it’s, “You think you own the road”, or “pay your road tax.”

Before I can process the inaccuracy of these statements and try and think of a comeback, I invariably see their brake lights jam on. Usually it’s not because they’ve stopped to continue the dispute, but because they’ve hit the next set of pointless traffic lights, about 100 yards up the road. These too, will be deserted. So I’ll sail through them as well.

I’m all for Smart Cities, but at the moment, technology makes city life dumber. Pedestrian crossings, for example, are much more intelligent systems because they use the higher levels of sophistication of the human brain.

A recent report (Rethinking Smart Cities) by The National Endowment for Science, Technology and the Arts, seems to confirm my suspicion that Smart Cities is a contradiction in terms.

There is a risk that people will react against them. A recent YouGov survey suggests that 96% of the British survey group are unaware of any of their city’s smart initiatives. If prompted to name examples of ‘technology that makes you smart’, they’d think of automated car taxing scams involving CCTV cameras, box junctions and deliberately baffling parking notices.

Under these circumstances, the most likely ‘technology revolution’ to take place would involve the masses rising up and destroying cameras. Machine to machine technology is getting a bad name.

And yet, and yet. The 24 hour strike by London’s tube train drivers on August 5th must surely have been the best advertisement for the M2M industry yet. This exemplified how human motivation has grown too complex and smart machines could step in to mass acclaim.

Millions of commuters suffered hours of fighting to get onto packed trains, then suffering the awful sweaty claustrophobia of being on a packed metal box in conditions that the most brutal factory farmer wouldn’t be able to get away with. All because the drivers, who already earn £50,000 a year (double the average commuters wage) and enjoy 45 days annual leave, wanted more. There’s no logical reason why a tube driver (who only has to decide between pushing a leaver, or pulling it) should get twice as much as a Junior Doctor. This is an example of where humans become too clever to do their job.

There are already driverless trains running without a hitch, on London’s Dockland Light Railway, so the case for an M2M driven tube is there. And it would get mass support from the public surely. Wouldn’t it?

Not entirely, as it turned out. We asked top social media analyst Crimson Hexagon to gauge public opinion on the tube and driverless trains during the course of the 24 hour strike. Using a combination of algorithms (to do the heavy number crunching and searching) and human intelligence (to guide these machine driven efforts), it tracked the trends on social media platforms such as Facebook, Twitter, Tumblr and the bloggersphere.

To my utter astonishment, support for automated drivers was not universal. In fact in some quarters the idea of relieving misery, with smart machines, was not popular at all. The minutiae of the demographics are too complicated to describe here, but two odd statistics stood out for me. Firstly, supporters of the strike are one thousand times more like to be Crystal Palace fans, a social group which has no set political affiliation.

Secondly, the opponents of driverless trains are highly likely to be fans of the National Health Service, another massive amorphous social group. In other words, left to itself, the tube strike didn’t create the demand for M2M technology it could, and should, have.

A massive lobbying opportunity was lost by the industry.

I’m surprised there were no representatives of the M2M out there, appearing on local news stations and making themselves available for

media interviews. Surely this would have been a great opportunity to bang the drum for M2M.

I’d be up for it. Apparently, opponents of the tube strike and fans of driverless trains are 267 times more likely to be cyclists.