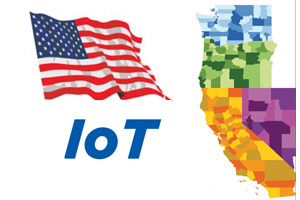 West Coast USA: California, Silicon Valley, internet start-ups. Could it be any more different from the East Coast – and surely it’s a hot-bed of developer interest in M2M and IoT, asks Guy Daniels.

The region certainly doesn’t disappoint, with countless companies – large and small – developing innovative M2M and IoT technologies. It also has a strong regional identity, one that is closely associated with the internet and networking culture of the Valley. Because, while telecoms development may have started over on the East Coast and continued in pockets in Texas and the mid-West, today’s network innovation is firmly centred around the San Jose region. Thanks in part to the work done at Stanford University, NFV, SDN and open source are the new drivers of telecoms network innovations, and every major vendor and global operator now has a presence in the Valley, tapping in to the innovation culture.

This all results in a perfect environment for companies to explore opportunities to develop new M2M hardware and services; there’s a wealth of talent available, plenty of funding opportunities and a ready-made ecosystem to support and scale successful projects. And, with the likes of Google, Facebook and Apple headquartered in the region, you would think the focus would be on consumer-based IoT technology.

After all, Google’s $3.2 billion acquisition of Nest Labs in January 2014 is enabling the smart thermostat company to scale up its home-based IoT products and services. Apple is following suit and is busy expanding its Homekit and Healthkit platforms to encourage developers to create an ever-expanding range of IoT devices and services. According to Gartner , there will be 26 billion IoT devices by 2020, and a report by Progressive Policy predicts that IoT will contribute up to $1.3 trillion to the US economy in 2025.

For the Silicon Valley giants, it’s all about building and supporting IoT platforms. But while there’s plenty of home-based IoT tech being developed, the region also supports a strong industrial-based development effort.

“Few manufacturers possess the sophisticated software engineering and user-interface design expertise to develop mobile applications that meet end users’ high expectations for a mobile app user experience,” said David Friedman, CEO and co-founder of Ayla Networks. “Ayla exists to handle the underlying complexity of making IoT connectivity work, freeing manufacturers to focus on their core expertise in making great versions of whatever they do best – whether it’s a smart plug, a thermostat, a water heater or a home appliance.”

Jasper, based in Mountain View, California, dropped the ‘Wireless’ part from its name a year ago to focus on M2M and IoT opportunities. “The real power of the Internet of Things is that it transforms a static product into a dynamic service,” said Jahangir Mohammed, CEO and founder of Jasper, which offers a cloud-based IoT platform for enterprises. “It’s no longer an isolated thing. You can dynamically change what it can do for people on a daily, minute-by-minute basis. So now it’s only appropriate that we don’t look at that as a ‘thing’. It’s a part of a much larger fabric; it’s a service. This is the real power of the Internet of Things.”

Networking company Systech, based in San Diego, California, is a great example of adapting to meet the new business markets, that are increasingly centred around M2M. It started life in 1981 building products for multi-user computers. Now it has entered the M2M space with its SysLINK range of IoT gate ways, which have recently received Z-Wave certification. Common applications of its gateways include building automation, energy management, retail and mobile health, with interface options that also include ZigBee, Bluetooth, WiFi, and cellular. At the beginning of June this year, Intel announced that it was acquiring specialised chip-maker Altera, based in San Jose. The $16.7 billion deal is a measure of the importance Intel places on IoT and M2M, as it seeks to better position itself as a leader in the emerging IoT sector, and to support the global IoT ecosystem it is developing through its network of Ignition Labs.

“When you imagine every device in your office and home potentially connected and online, it’s going to require networking equipment that can handle the stress of a projected 26 billion connected IoT devices by 2020,” says Gary Marks, president of Opengear. “You have to consider how reliant users are going to be on these devices when they’ve become so deeply entrenched into our daily lives – connectivity hiccups simply won’t be tolerated.

However, there is also significant cross-over between M2M and IoT activities on both coasts. BK Medical, mentioned in our East Coast review, used the services of IoT platform provider RTI, a Sunnyvale, California-based company that was named ‘The Most influential Industrial Internet of Things Company’ in 2014 in a survey conducted by Appinions on behalf of Forbes. RTI develops data distribution service (DDS) technology, which provides a physical-to-digital link for industrial IoT applications.

So it’s not all connected home and smart appliances on the West Coast; there’s plenty of innovation to support industrial and vertical market M2M deployments as well.