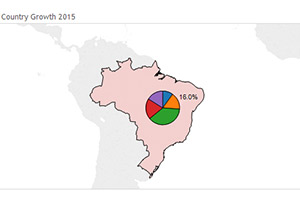 While the 2014 Brazilian market for electronic access control equipment reached an estimated $92 million, the latest information from IHS Economics reveals that Brazil will struggle to see positive growth over the next several years. In fact, the access control market in Brazil is forecast to decline by 1.2% in 2015 and decline by another 0.8% in 2016 before growth returns in 2017. Despite the slowing economy, the Brazilian market for access control will be resilient and is expected to return to strong market growth in 2018.

The near-term access control market in Brazil will be most affected by the following: Overall, suppliers and integrators involved in the Brazilian market believe large infrastructure and government and commercial projects will soon be placed on hold, leading to a market decline through 2017. The Olympics have also not done much to help the security industry, in part because stadium construction will mostly occur in certain cities and will not have widespread effects on other end-users across the country. There will only be about 14 new venues spread across three main zones — Barra, Copacabana, Maracanã and Deodoro. Furthermore, the number of police, military and other security personnel will far outnumber that of the London Olympics in 2012. In Rio de Janeiro, reports suggest that there will be nearly 85,000 law enforcement personnel at Olympic venues.

One positive sign for equipment suppliers in the Brazilian market is the level of integration between video and access control. The interest and implementation of integrations is a tremendous opportunity in the country. Replacing services with technologies, like manned guarding with electronic security, is a trend that will continue to improve the market over the next five years, due to wage increases, as well as more affordable – and higher quality – access control technology.