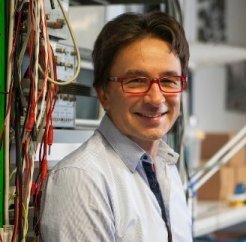 Telit has introduced the first in a new series of modules based on Altair chipsets, designed to support LTE Category 1 enhancements for Machine-Type Communications (MTC).

A global enabler of the Internet of the Things (IoT), Telit has announced this in co-operation with Altair Semiconductor, a provider of LTE chipsets.

The LE866 is said to be the smallest LTE module currently in the market. The LGA footprint is 15 x 25 mm. It is a UE Category 1 device with maximum data rate of 10 Mbps downlink and 5 Mbps uplink. The module employs Altair’s FourGee-1160/6401 IoT-optimised chipset that provides extremely low power consumption, which results in a significant increase in battery life, while reducing cost/complexity compared to traditional high-performance LTE devices.

The LE866 is software upgradable to support the power-saving mode (PSM) that 3GPP has specified for MTC in Release 12, which is being demonstrated in partnership with Altair and Ericsson during CTIA Super Mobility 2015 in Las Vegas.

The LE866 will be first released commercially for the U.S. market, with additional regional variants to follow.

Release 13 of the 3GPP LTE standard, which is foreseen for March 2016, will bring further improvements on power consumption, cost/complexity and coverage for IoT and M2M applications. However, with the LE866, Telit and Altair are extending the addressable market via power, size, and cost combination that is a significant game-changer. Ultra-small modems that support the lower categories are needed for numerous applications, including wearable devices, smart homes and smart metering, fleet management, point-of-sales and health monitoring among others.

Felix Marchal, chief product officer, Telit, said: “The decision to partner with Altair was an easy one to take. We expect LTE low-category devices to catalyse billions of dollars in spending by the M2M and IoT industry, and Altair is a leading vendor in this space.”

Eran Eshed, co-founder and VP of Marketing & Business Development at Altair, said: “Not all CAT-1 chips are created equal. The great market potential for CAT-1 draws many players to try to compete. However, most are simply rebranded higher-category chipsets that are functionally compatible with CAT-1, but fall short on power consumption and die size. Our close cooperation with market leader Telit brings the first truly IoT-optimised module to the market, unlocking new use cases and expanding the IoT market.”